“Big Night at The Edge, with Kevin Kling and Aaron Gabriel” 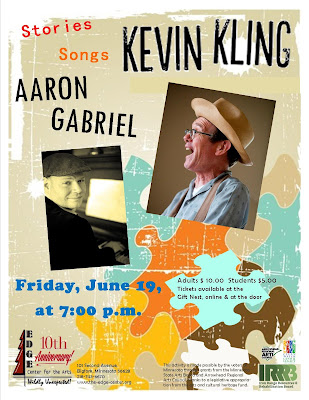 Join Kevin Kling and Aaron Gabriel for an evening of stories and songs about Minnesota in celebration of the 10th Anniversary of The Edge Center.  The first act to ever be on stage at the Edge Center in Bigfork was Kevin Kling back in 2005. Kevin and Aaron will bring Kevin’s special brand of master story telling and commentary heard on NPR’s “All things Considered” along with Aaron’s award-winning composing talents and music. A good chance to see and hear a little bit of what the first Edge audience experienced enhanced with music from Aaron. Friday June 19th at 7PM.  Prices $10 adults, $5 children. 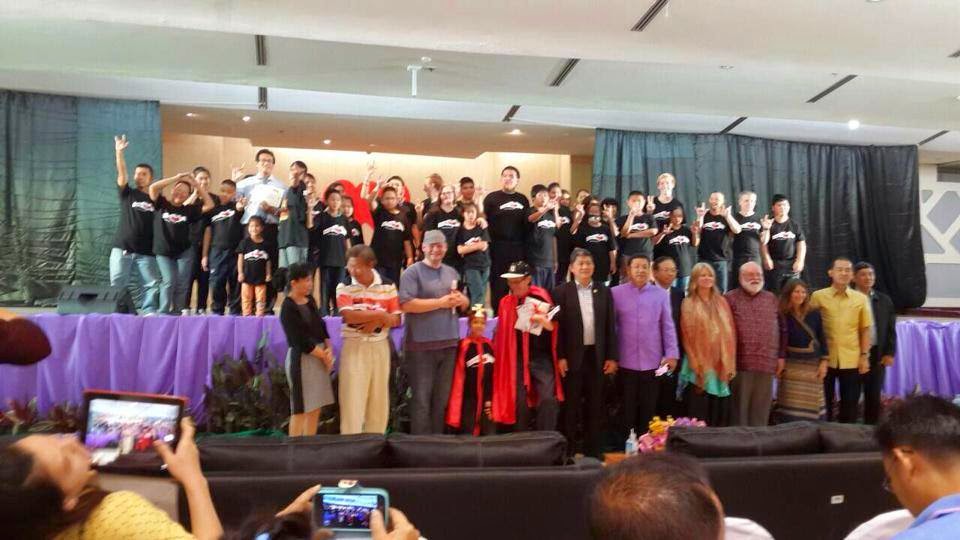 Kevin and Aaron have collaborated together for many years, most recently in Thailand with Minneapolis’ Interact Center.  This will be a rare opportunity to hear and see some of their favorite selections. Kevin is excited to be back at The Edge Center, 10 years after debuting his “Freezing Paradise” play there, which toured with the Guthrie in 2005.  And Aaron is glad to be performing again in his hometown. He was in Bigfork in 2010 when he directed an EdgeWild players production of “The Laramie Project” and again, as an actor, for a Patricia Feld production of “8 The Play”. Above Thailand Show where Keven and Aaron appeared recently. 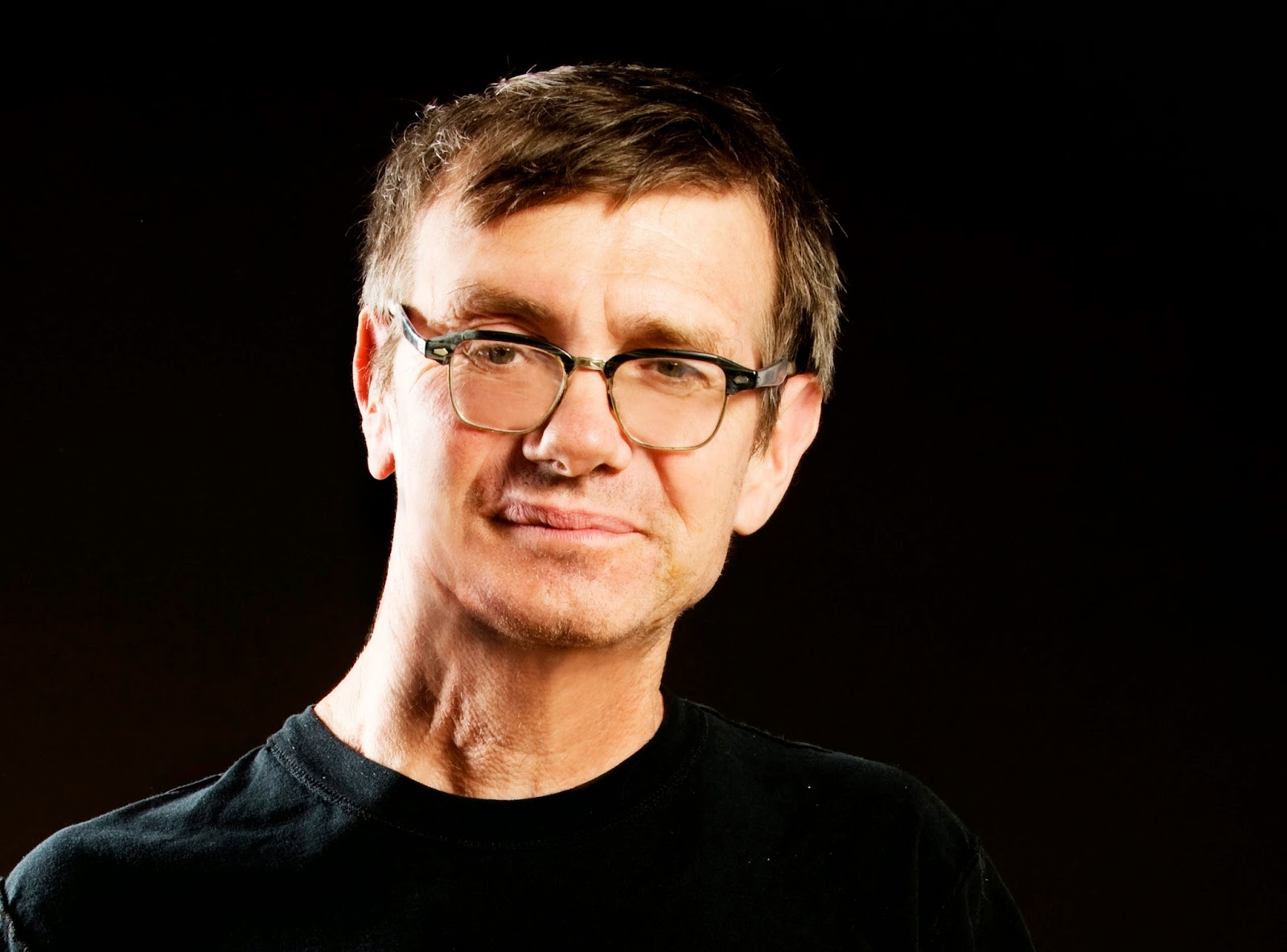 Kevin Kling, named the Minneapolis Story Laureate in 2014, storyteller Kevin performs his stories nationally and internationally, often at the Guthrie Theater and the annual International Storytelling Festival in Jonesborough, TN. Monologist and playwright Kevin Kling grew up in Osseo, Minnesota and graduated from Gustavus Adolphus College. 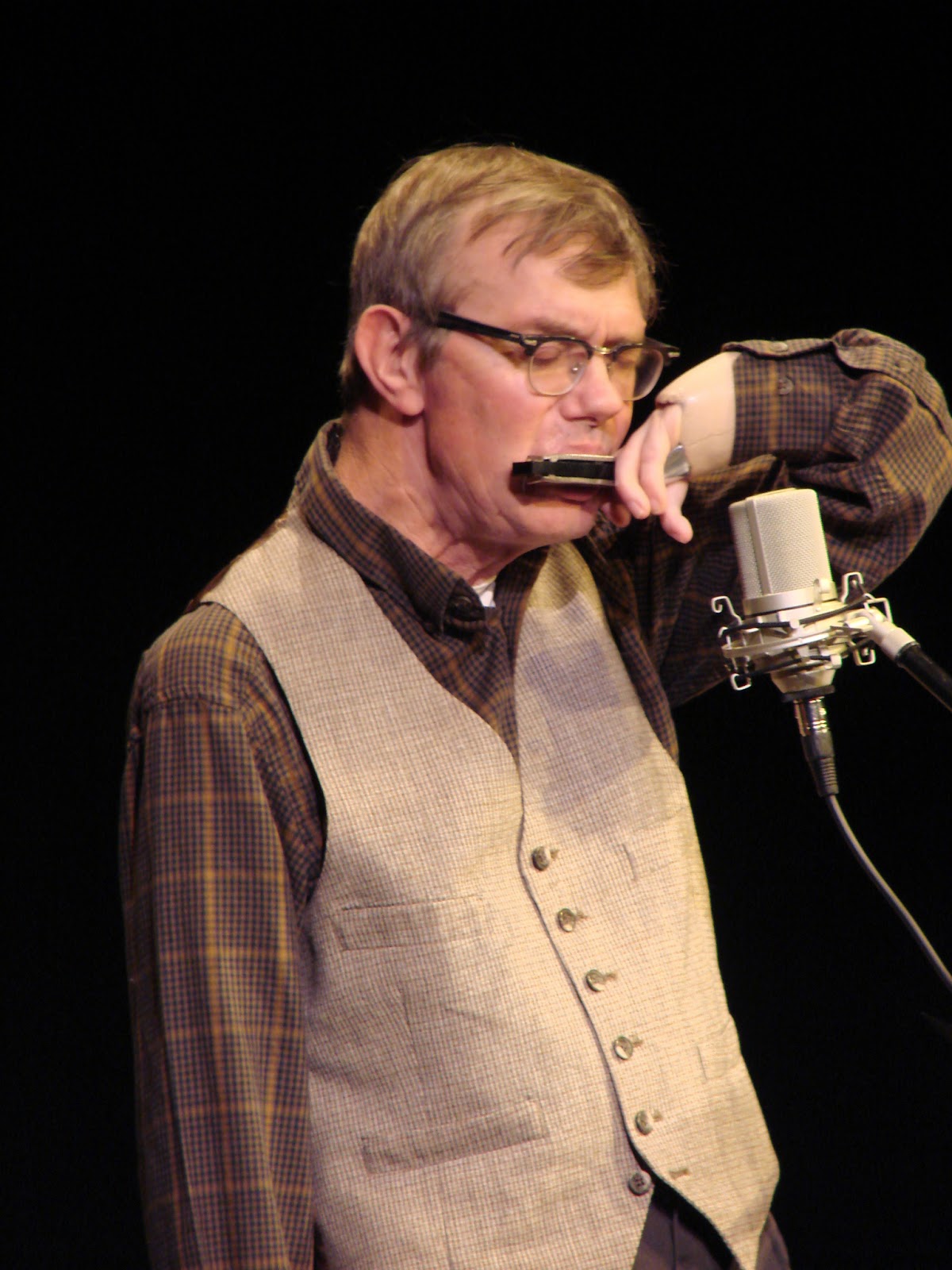 He has performed his plays in Sweden, Sydney and Perth, Australia, Edinburgh, Scotland and in the Czech Republic.  His autobiographic piece "Home and Away" premiered at the Seattle Rep and moved to Second Stage Theater, off Broadway, under the direction of David Esbjornson, where it received a received a Drama Desk Award nomination. 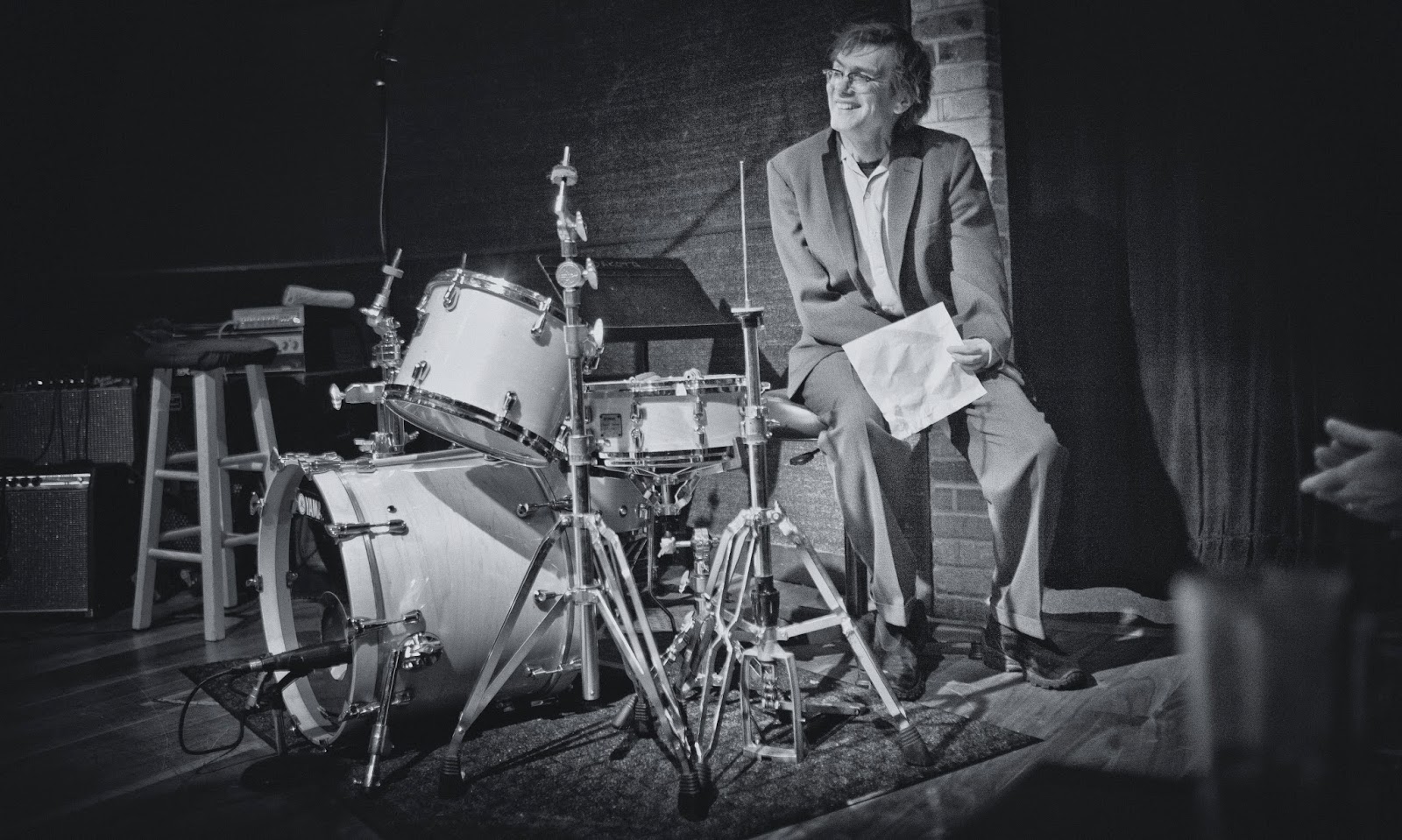 His plays have been produced at The Goodman Theater, The Jungle Theater, the Denver Center Theater, Seattle Rep, the Cincinnati Playhouse, Interact, the Guthrie and regional theaters throughout the country.  He has been awarded fellowships from the National Endowment for the Arts, The McKnight Foundation, The Minnesota State Arts Board, The Bush Foundation, and The Jerome Foundation.  He is a McDowell Fellow and has received the Whiting Award, the A.P. Anderson Award, the VSA Jeahny, and the Eric Peterson Award. 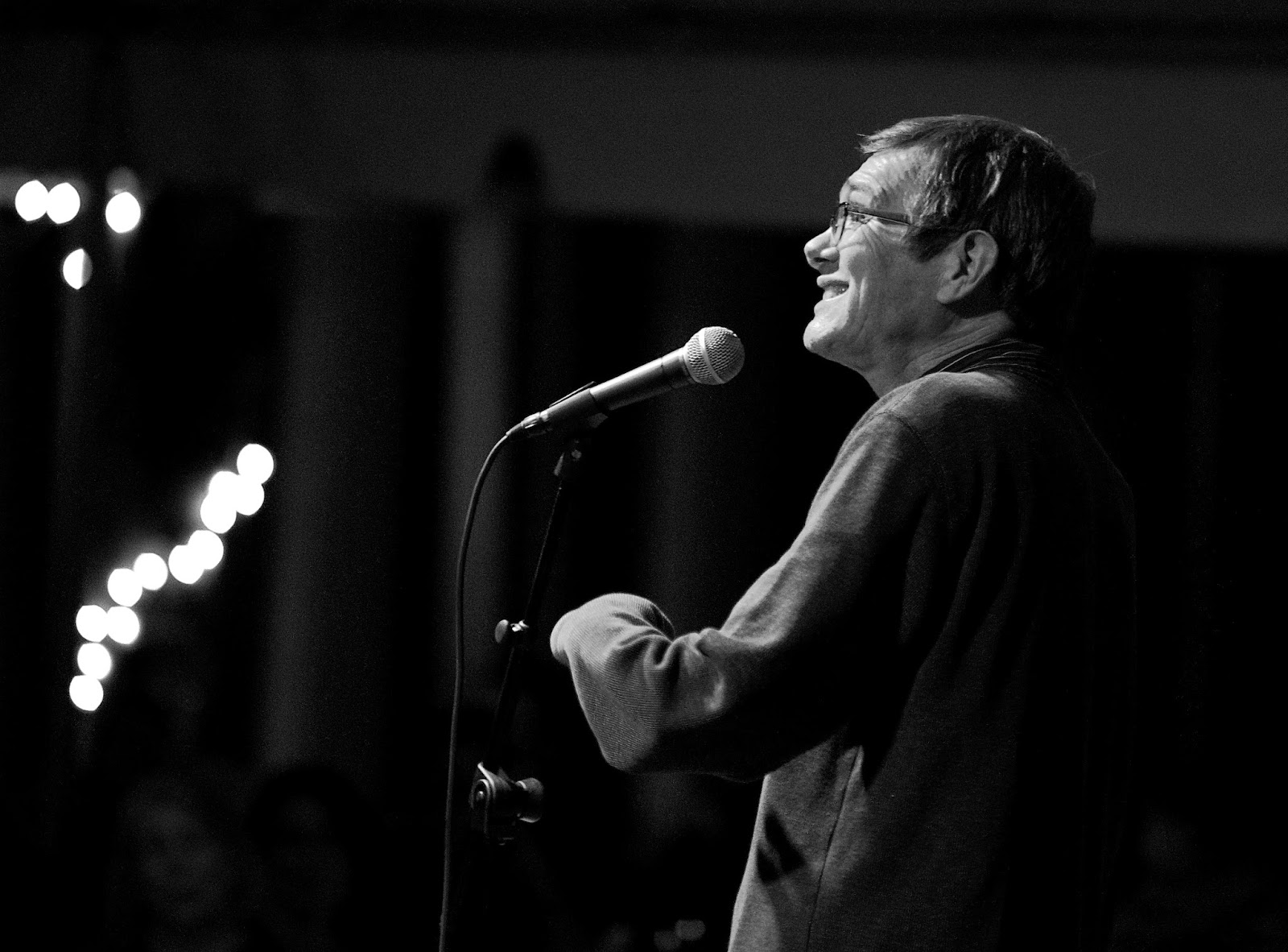 He appears often at the National Storytelling Festival in Jonesborough, Tennessee, is a commentator for National Public Radio’s “All Things Considered” and has authored five books published by Borealis Books, The Dog Says How, Holiday Inn, Big Little Brother, Big Little Mother and On Stage with Kevin Kling.  His book, Come and Get It, was chosen as the 2012 Minnesota Center for Books Arts “Winter Book”.  Kevin has produced six storytelling CDs.  His website is:  www.kevinkling.com 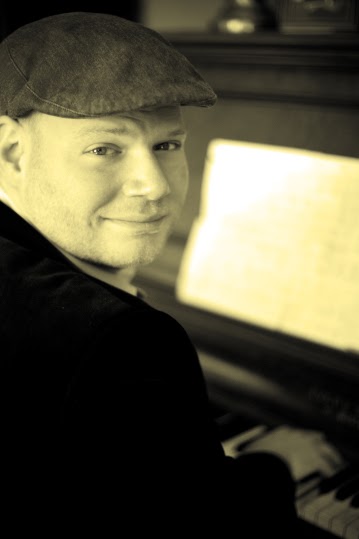 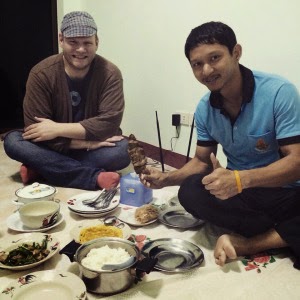 Other works include Madame Josette’s Naughty and Nice andSugar and Spice, By the Seat of Our Pants, Work of Heart, Hot Jazz at da Funky Butt, and Madame Majesta’s Miracle Medicine Show (Interact Theater); Owl Moon and Princess Academy (Stages Theater Company); A Midsummer Night’s Dream and The Bug (Center Playhouse). Aaron has worked with theaters throughout the Twin Cities including Theater Latte Da, Guthrie Theater, Ordway Center for Performing Arts, Illusion Theater, Children's Theatre Company, Minnesota Opera, Nautilus Music Theater and Chicago Avenue Project. He is a graduate of Augsburg College in Minneapolis and Kings College in London. See more about Aaron at:  www.aarongabrielcomposer.com (Aaron shown below during a visit to Bigfork.) 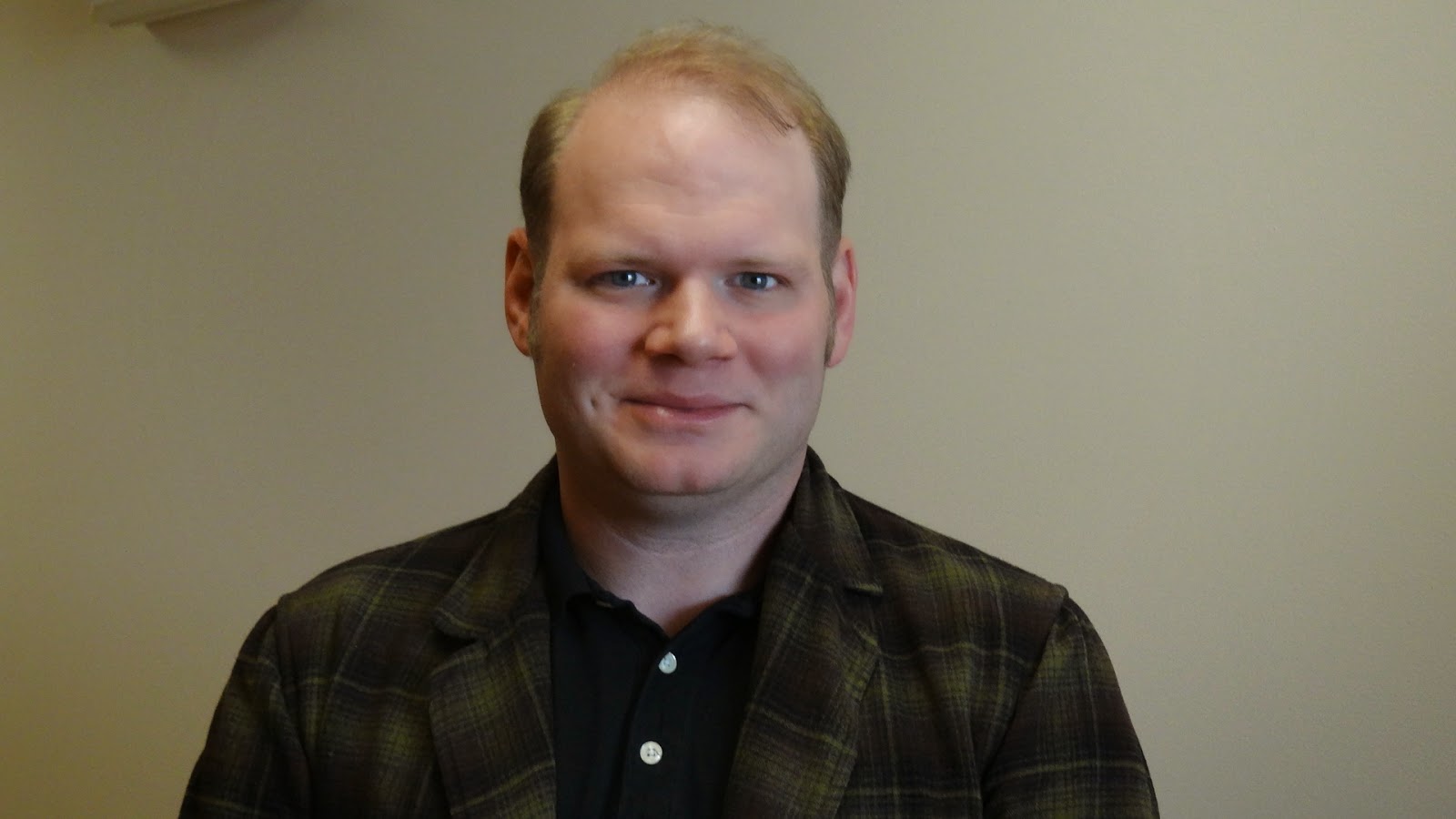 For a chance to see the very first act at the Edge, Kevin Kling,  and a returning Bigfork resident, Aaron Gaberiel, Join them for an evening of stories and songs about Minnesota in celebration of the 10th Anniversary of The Edge Center.  Find out a little about what the first audience at the Edge heard and saw on stage back in 2005. It will be interesting and entertaining.  Friday June 19th at 7PM.  Prices $10 adults, $5 children.