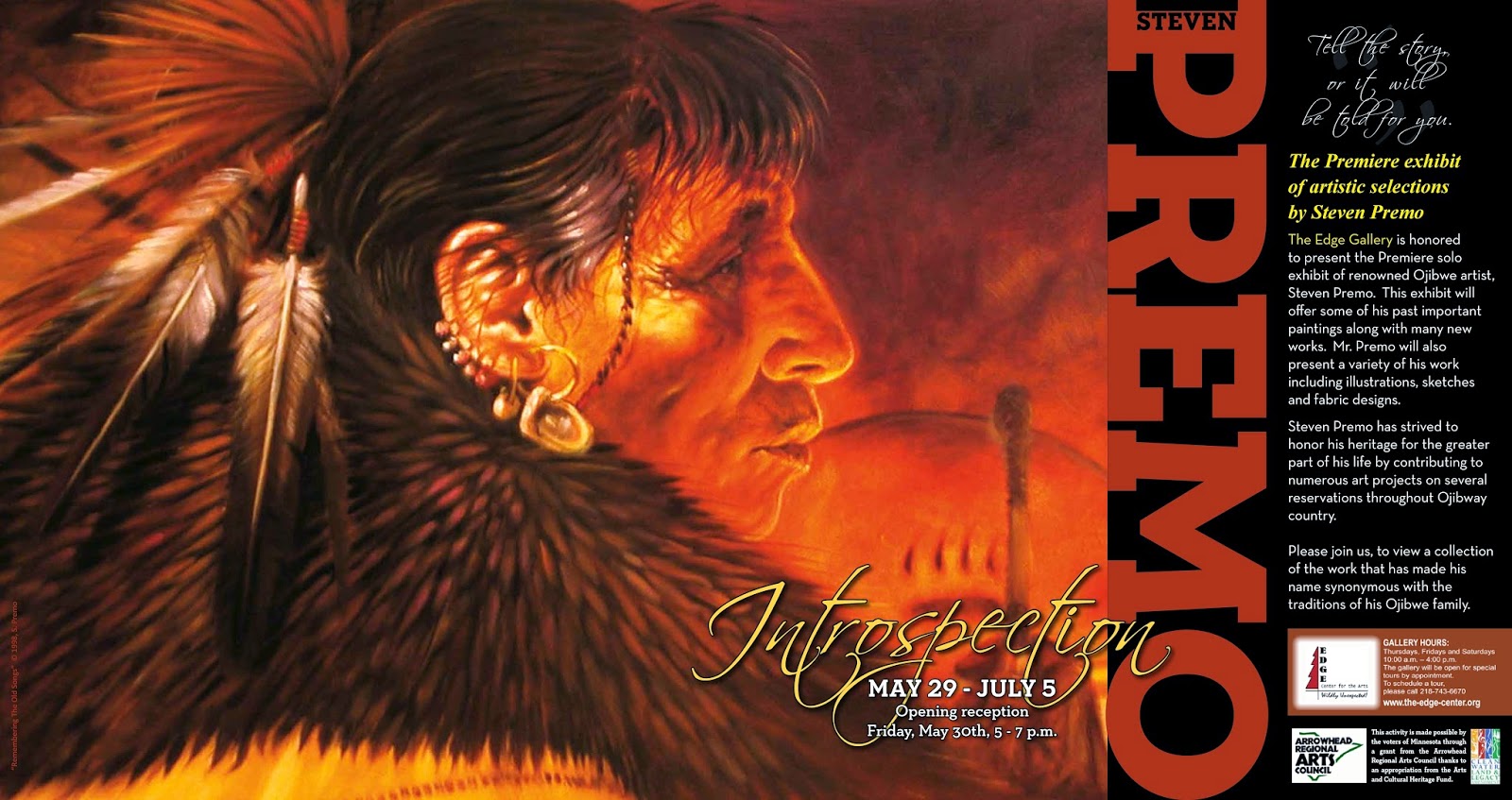 The art currently on display at The Edge Center Gallery in Bigfork, titled "Introspection", is by Steve Premo, a Native American artist from Minnesota who lives and works in the state. Some of his public work can be seen at the Hinckley Minnesota Fire Museum, in the Mille Lacs and Hinckley Casinos, Grand Makwa Cinema, in the Mille Lacs band Government Center and District 3 Health Care Center, and Lac Courte Orellies Cultural Center. Recently, he created a War Memorial plaque honoring Native Americans who served in American wars. It is on display at the Veterans Mall at the Minnesota State capitol. “Introspection” shows some of this past works along with many new ones.  The exhibit includes paintings, blankets, and fabric designs. At the Edge Gallery from May 29 to July 5 with the Opening Reception on May 30 from 5PM to 7PM with an opportunity to meet the artist and enjoy refreshments. The exhibit and reception is free and open to the public Thursdays through Saturdays 10AM to 4PM. 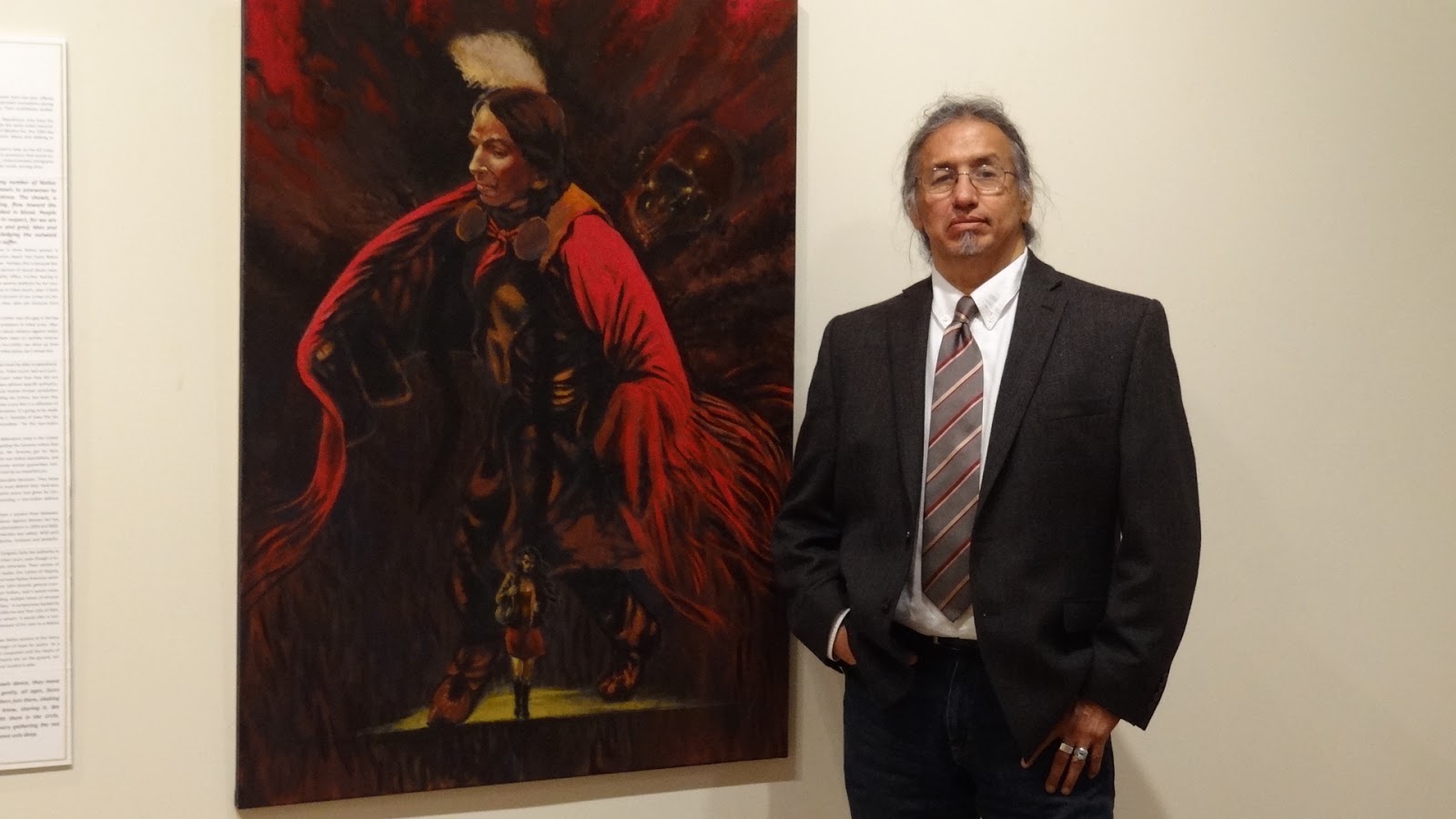 Above is the artist with one of his works depicting the red shawl dance performed at some powwows by Native American women who have been affected by violence. The following are excerpts from the Steven Premo Bio for the exhibit program and best describes the artist and his work.  The following split painting is titled "The tree of life". 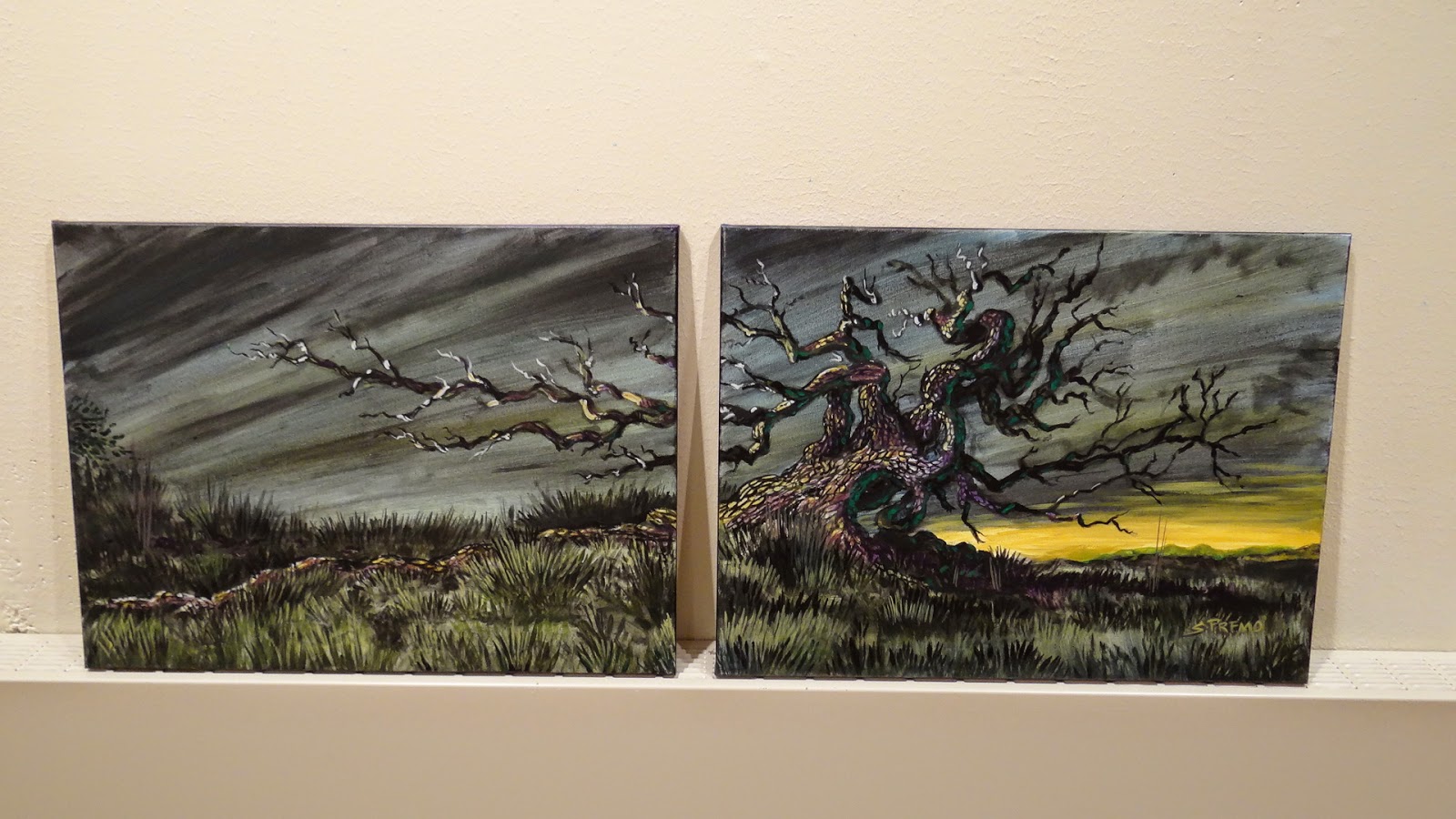 “My art is, or I would like my art to be, a story of a historical Native narrative.  Though not literal events, I strive to honor my heritage through emotional interpretations. If I painted my cultural icons, it would just be a record of my background.  But if I paint in the language of the majority as it relates to my culture, then there initiates a dialogue.  Thus, a better understanding." 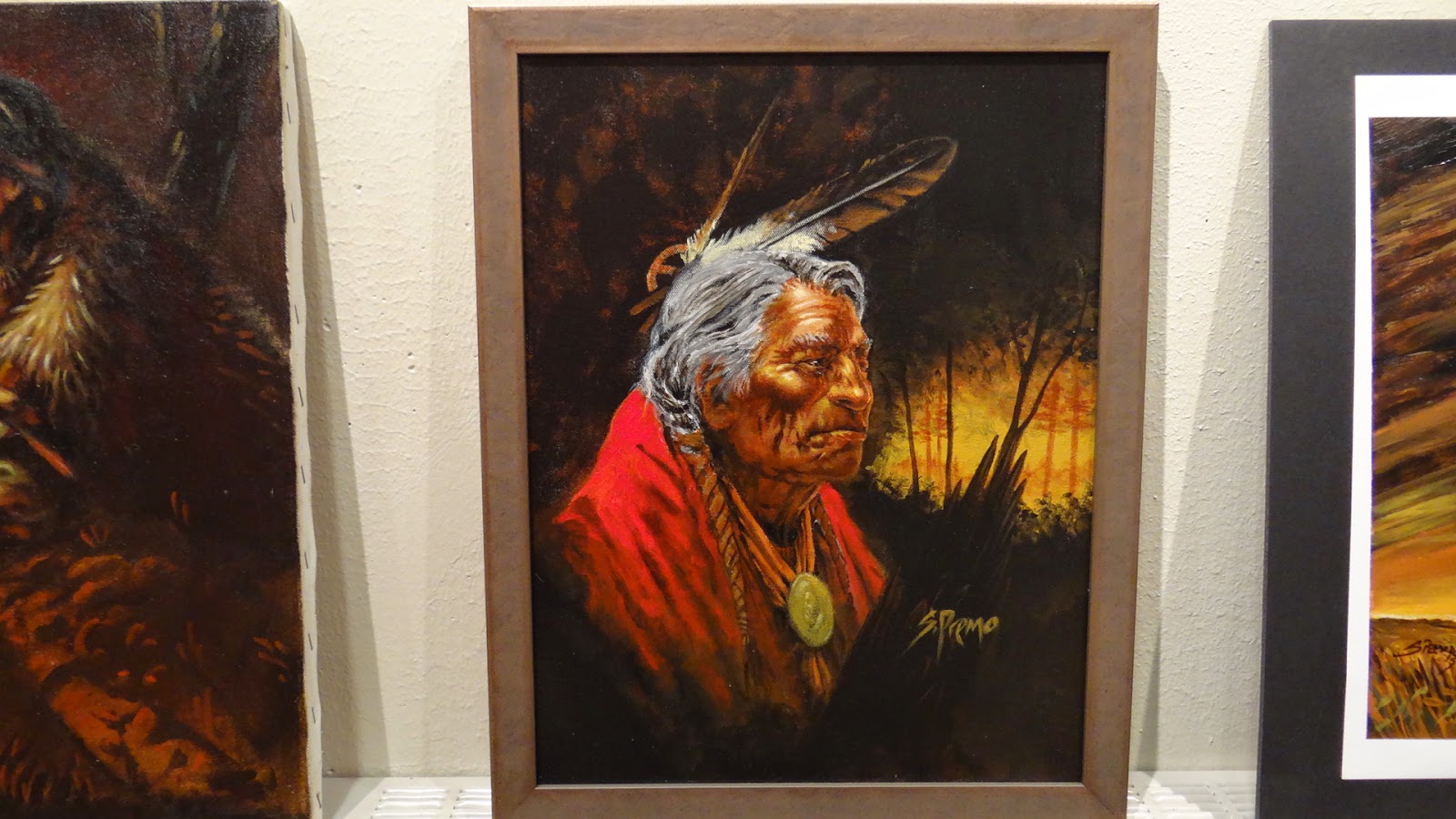 “At a young age I knew I wanted to create. At age 15 I had a great urge to paint and use color.  After working on my drawing skills, which I considered the basis of all painting, I finally began painting several years later.  Primarily self-taught, I did have some instruction…” 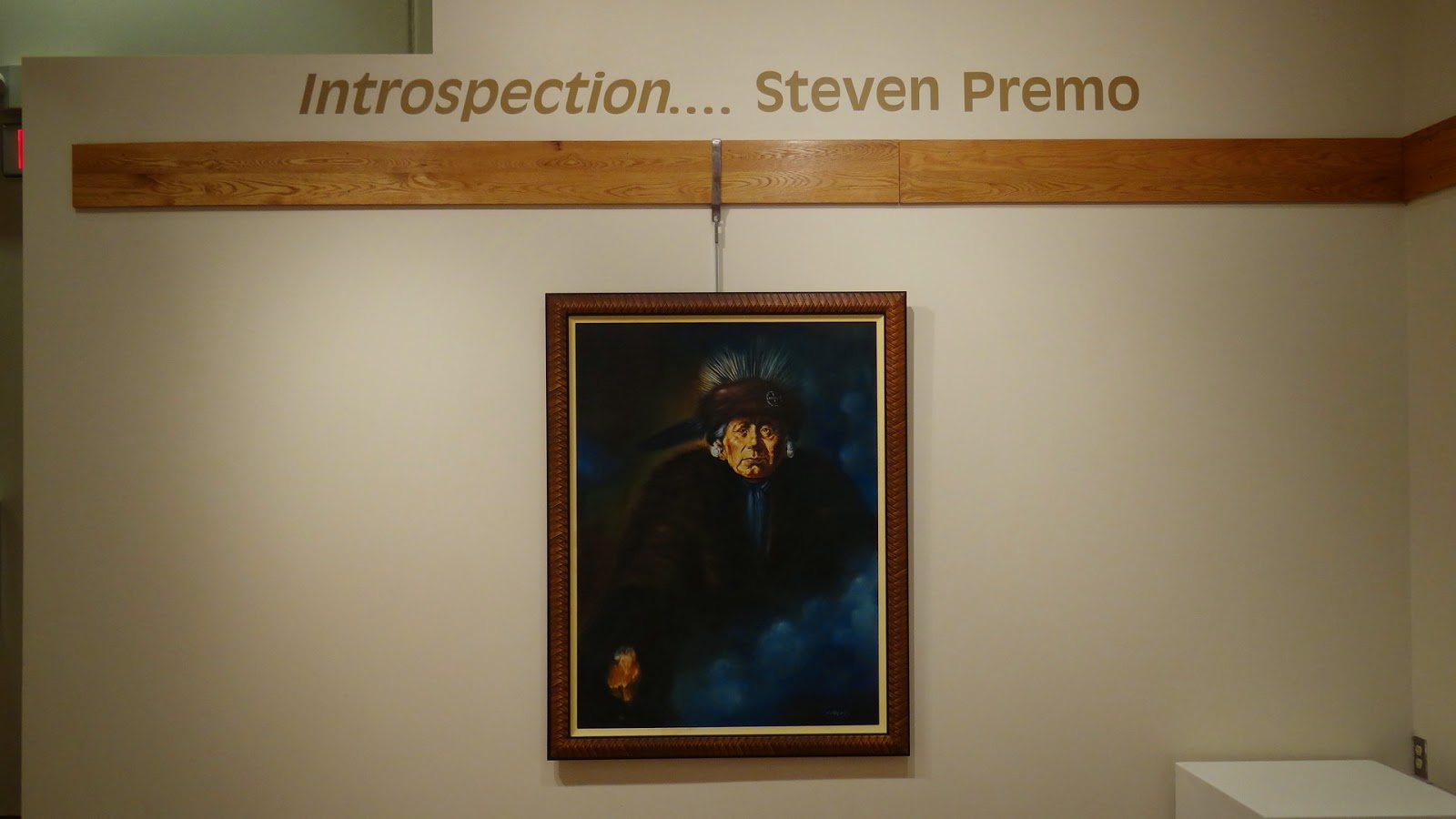 “Rembrandt was a great influence in my beginning years.  His grasp of light intrigued my sensibilities for allegory.  The storytelling in the late of the evening served as a reminder to me of growing up on the reservation gathered around the kerosene lamp.  Van Gogh’s 'Potato Eaters' was a recollection of my house. A later influence was Kathe Kollwitz’s incredible charcoal drawings and prints telling of suffering.”

“Currently I work for my tribe as a graphic designer at Grand Casinos Hinckley and Mille Lacs.  It is very gratifying to be a creative problem solver.  Through my partnering in 1983 with Ignatia Broker on the book ‘Night Flying Woman’ and later with Cindy Goff in 1996 to write and illustrate a comic book titled ‘A Hero’s Voice’, I became known to my community and was sought after to illustrate books, posters, and logos.”

The below Premo art is titled "He smokes his pipe and speaks of horses". 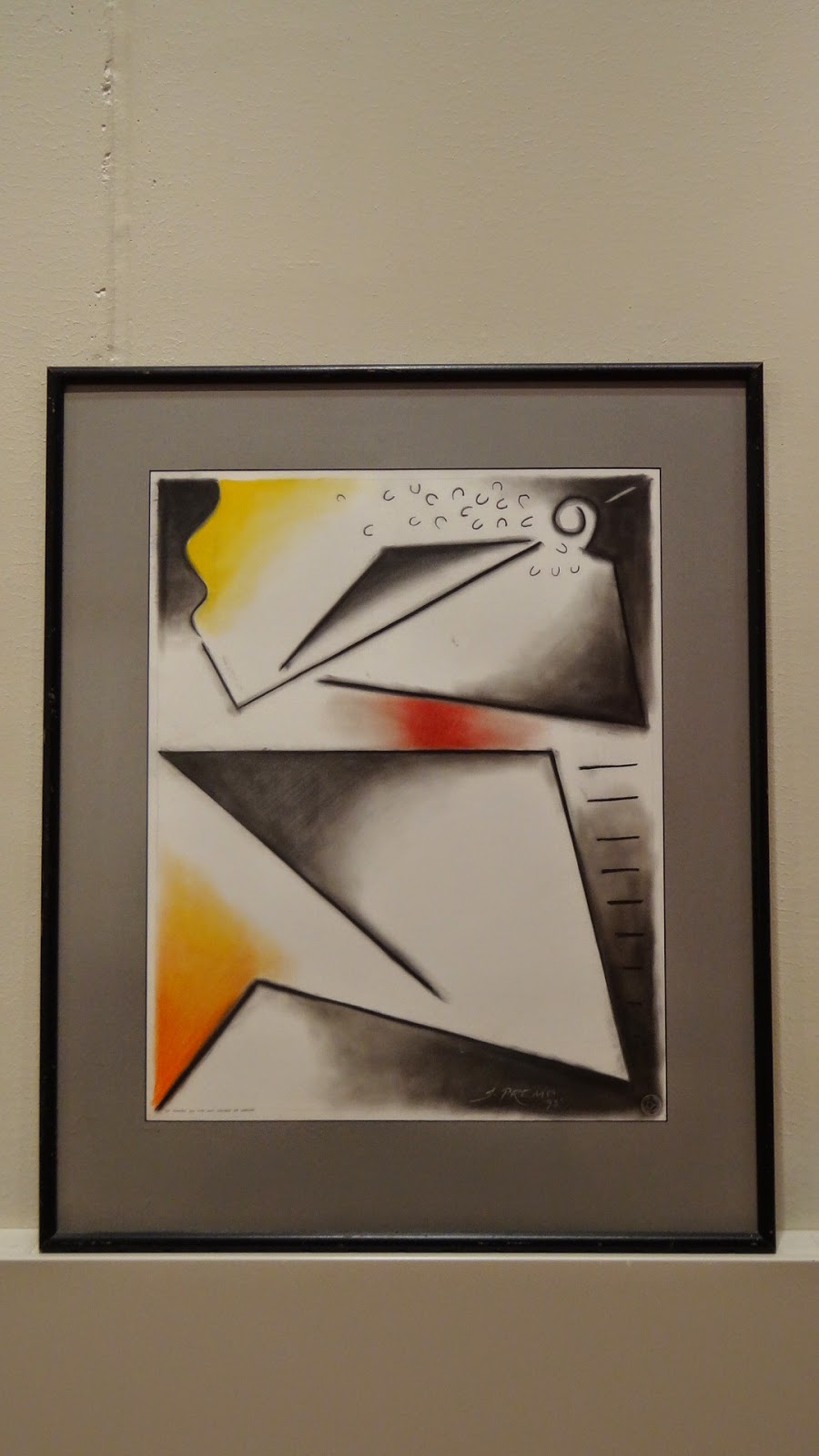 “For the Hinckley Fire Museum I painted a mural of an old man’s survival story of the 1896 fire. Along with George Parry, I participated in painting a large mural at the Lac Courte Orellies Cultural Center.”

The below image is of the Hinckley mural fire on display outside of the museum. It was done as a five year display and is still available 14 years later. 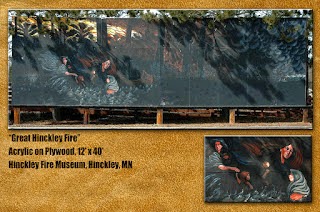 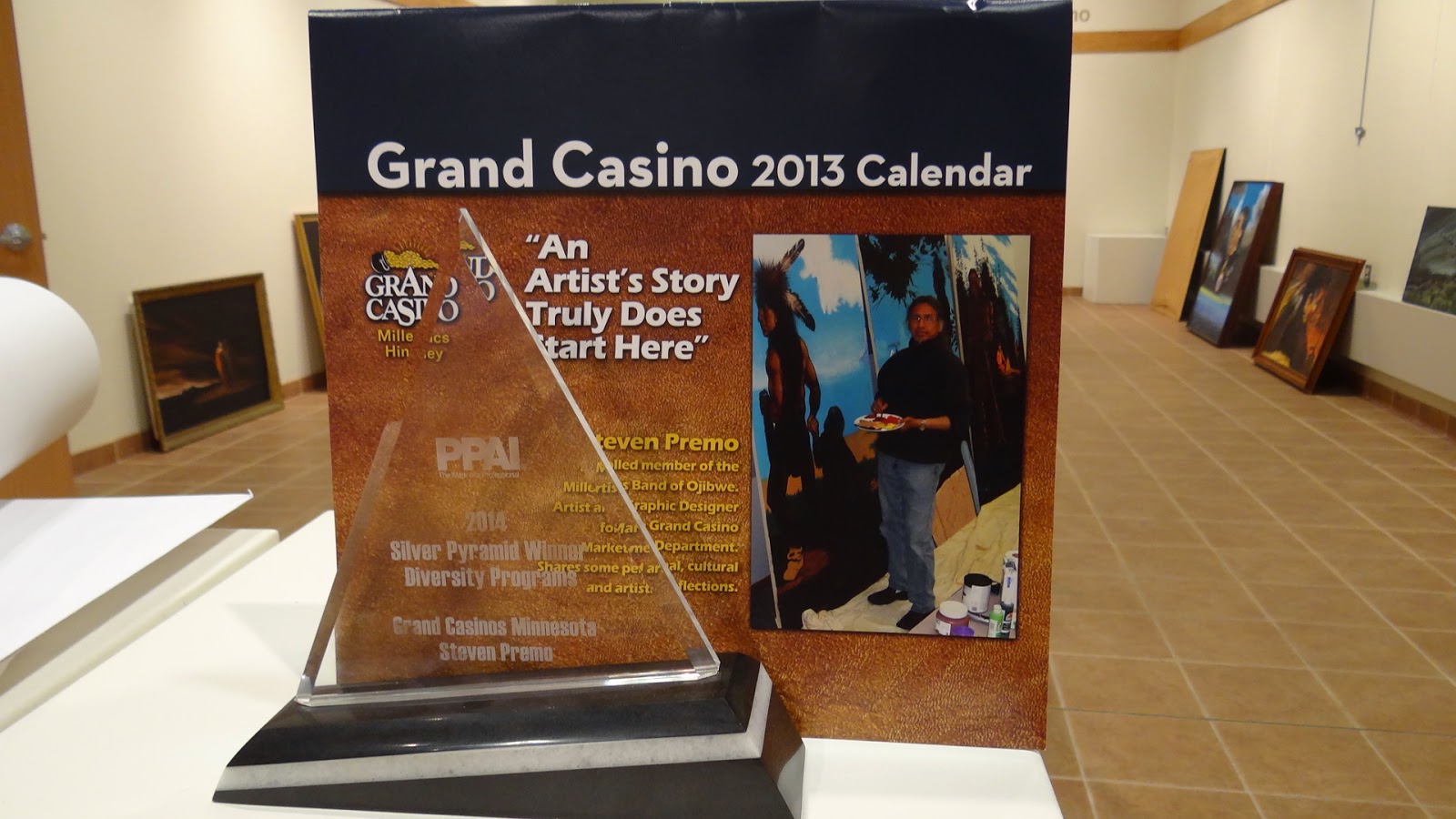 Steve Premo is not a new artist to The Edge Center and its gallery.  He has been a guiding force as The Edge moves toward more involvement in Native American culture and exhibits. His work was part of the gallery’s exhibits "This is Displacement" and "Powwow Perspectives." 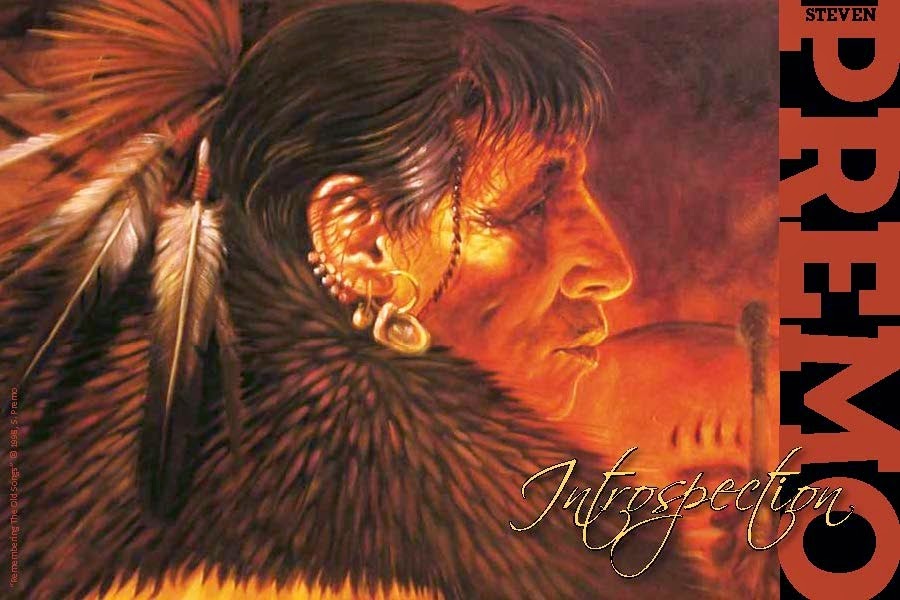 The current exhibit, "Introspection", is his first one-man show. The Edge invites you to see this colorful and impressive exhibit. Come anytime from May 29 to July 5 during open gallery hours on Thursdays through Saturdays from 10AM to 4PM, or better yet attend the free Opening Reception on May 30 to meet the artist, and enjoy refreshments. The Edge Center Gallery is in Bigfork next to the Bigfork School. 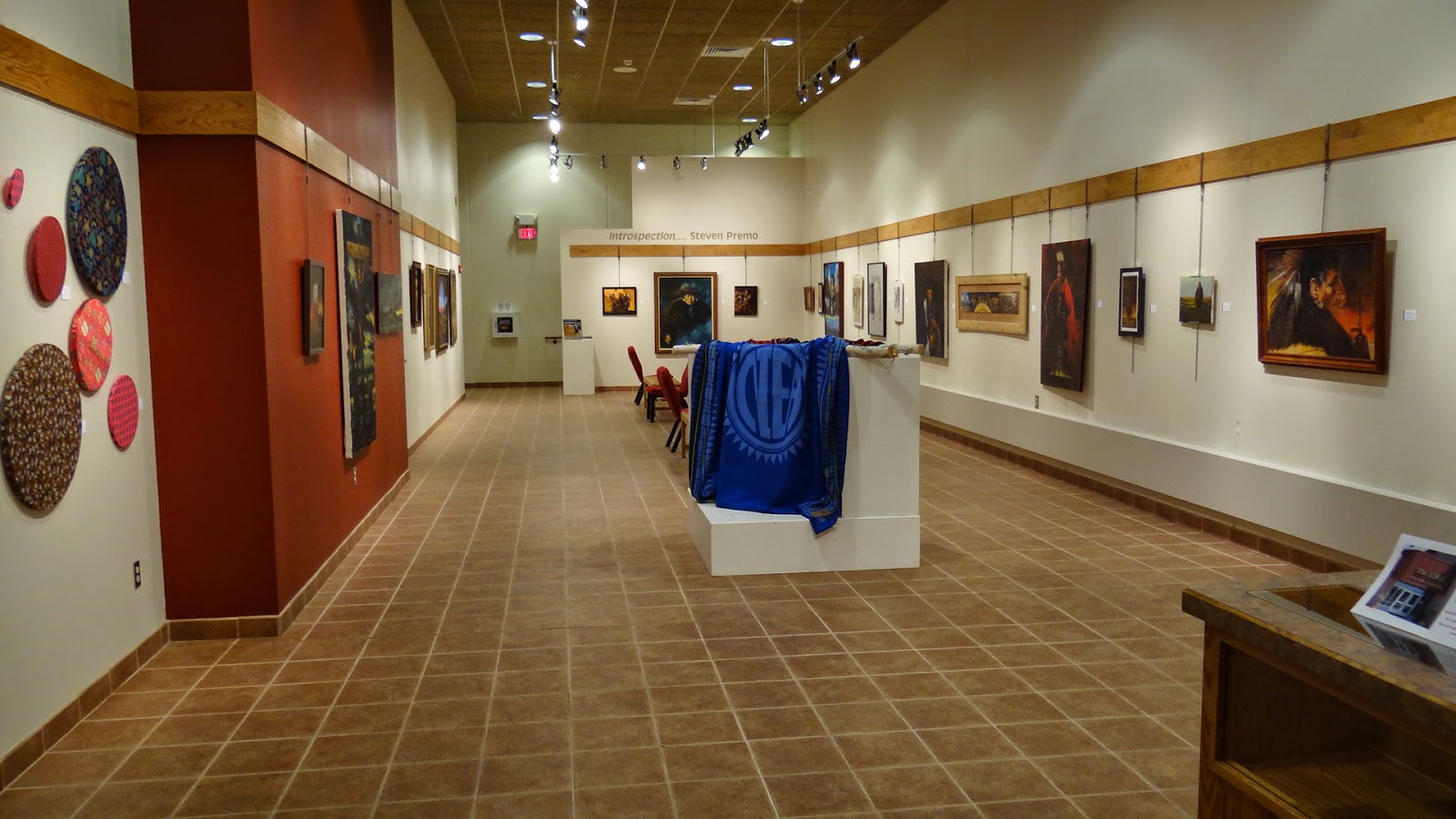 Posted by Edge Center for the Arts at 4:57 PM