Elvis Sighting at The Edge In Bigfork 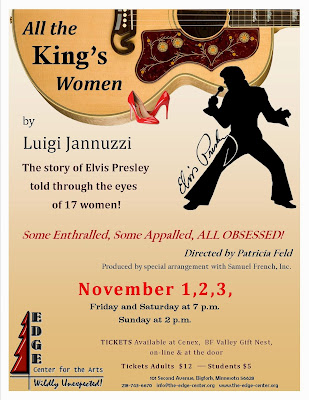 Well, actually it is an Elvis impersonator, and he won’t be in an Elvis costume, but he is obsessed with The King, and so are most of the characters in All the King’s Women. It is a comedy showing on stage in Bigfork this weekend. Decades after his death, Elvis Presley’s music and personality still affect our culture. This comedy examines how chance encounters with the “King” affected 17 women’s lives. Through various monologues this play might also give you a difference perspective of the man.  You might even want a picture with one of the “The King’s” life size cutouts.  And there will be other surprises.  All the King’s Women by the EdgeWild Players at The Edge Center in Bigfork, November 1-3.  Friday and Saturday 7PM. Sunday 2PM. Price $12 adults $5 children. 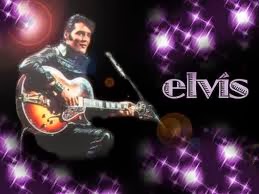 Starting with the shop owner where his mom bought Elvis his first guitar for $12.95, there are 3 monologues and 5 scenes, which might give you a different perspective of the man and those obsessed with him. 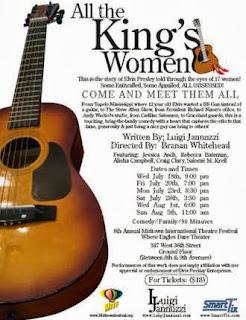 Elvis sightings in the play include:
- Elvis and his Mother coming in to buy Elvis' 11th birthday gift, his 1st guitar.
- Steve Allen Show discussions about Elvis' hound dogs and pelvic movement.
- How a supermarket encounter at 3 am changes a women’s life.
- Gushing White House secretaries over a visitor at the gate for Pres. Nixon.
- Andy Warhol's Pop Art Elvis exhibition discussions
- Who gets to sell Elvis his next Cadillac.
- Graceland security very secure about the King’s kindness
- Graceland souvenir shop’s recent ex-employee, her obsessed boyfriend, souvenirs, Elvis, and life. 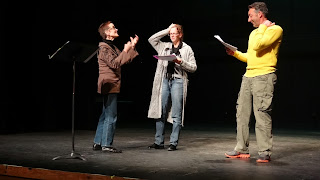 According to Patricia Feld, Artistic Director of The Edge Center (with two of the actors above), “You’ll leave this play smiling, happy, and remembering Elvis in your own past…depending on your age.  Many of the 17 encounters will make you laugh, and the impact Elvis made on some of the characters’ lives will make you think about our American cult of fame.  We’re making the theatre into a party with life-size, Elvis cut-outs to take your picture with, decorations, and other surprises. Please do come and enjoy the very talented local ensemble’s performance of this funny tribute to the King.” 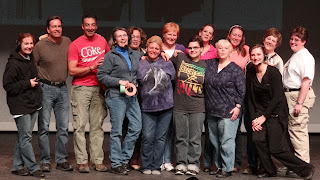 Above is the cast and stage crew during rehearsal. The cast,made up of a variety of local talent, with many appearing in past Edge performances and even a first timer.  In no particular order the cast includes: Allissa Corrow, Erin McKinney, Greg Anselmo, Greta Drewlow, Melisa Newman, Paula Taylor, Regina Bloch, Sandy Lyytinen, Val Conner, Randy Peterson, and Valerie Sobrack. The stage crew includes: Christen Anderson, Srormy Riley, and Gay Reese. 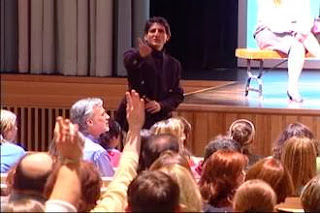 The play’s author, Luigi Jannuzzi (above), born in 1952, is a contemporary American comedic playwright and educator from New Jersey.  His work has won awards in the UK, three National Endowments for the Humanities, Goshen peace prize and others. He is a University Of Notre Dame graduate and a member of the Dramatist and Author’s Guild and has 27 plays published by Samuel French. This play is produced by special arrangement by Samual French, Inc. 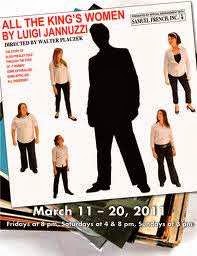 Here is what some critics have said about All The Kings Women:

"Jannuzzi has a good ear for the periods and for his characters, allowing his actors to show range. The point is perhaps not so much about Elvis per se, but instead these scenes reveal snapshots of an American culture, people, and place." NYTtheatre.com

"His plays unfold in such an intimate and genuine way. He writes about Elvis Presley fans with educated and unconventional twists." RobertaontheArts.com

"In a nearly chronological order, the stand-alone scenes take place between the 1940's and the present day. Each scene is listed in the program with a date and location, driving home the point that these characters and situations are best understood within the context of their period." NYTheatre.com 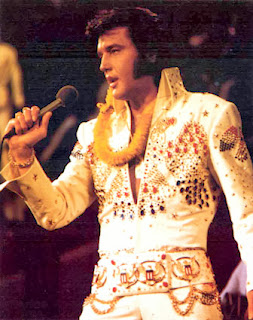 You don’t have to be an Elvis fan going into this family comedy play to leave it with an appreciation of the man and his influence on us…then and now.  The EdgeWild players will give you laughs, smiles, and something to think about. 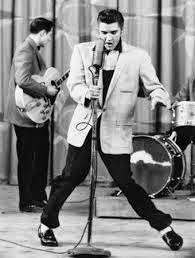 Come and see All the King’s Women and bring a camera just in case you want a memory with the man who changed our music and culture plus affected many he met during his too short life. Performances Friday and Saturday 7PM, Sunday 2PM 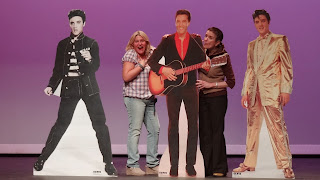 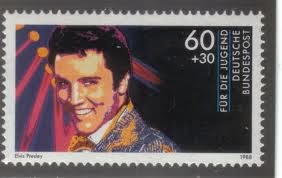