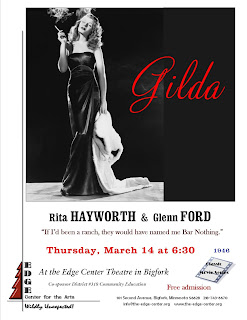 In March it can still be hot in Argentina but that is not the heat you will see in this month's movie classic in Bigfork. “Gilda” is set in Argentina and stars Rita Hayworth who had her own global warming effect back in 1946 when it was released.  In fact, the scientists testing atom bombs on the Bikini Atoll, found her performance so impressive they named one of test bombs “Glida.” This classic film noir production also stars Glenn Ford, just back from four years in the service, in his breakout performance with Rita. Add to that hearing about the movie’s background from an expert will make the visit special. 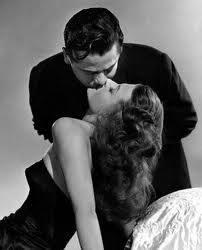 Learn many of the hidden stories about “Gilda” at The Edge Center in Bigfork along with a cartoon from the same year on March 14, 6:30PM. The free movie presentation by the Classic Movie Series and treats matched to the movie will include a background presentation by Jack Nachbar. 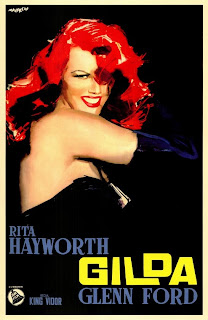 The plot includes a shady gambler who gets into “hot” water by trying to cheat the wrong casino, a beautiful women singing and dancing up a storm, a bit of murder, and lots more. 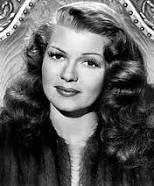 Rita Hayworth was a wonderful “femme fatal” for the post war era.  She was born Margarita Carmen Cansino in 1918, changed her name a couple of times, died her hair red to fit more roles, was on the cover of “Life” magazine five times, was the first dance partner of both Fred Astaire and Gene Kelly, was in 61 films and married/divorced five times. She said, "Basically, I am a good, gentle person, but I am attracted to mean personalities.” 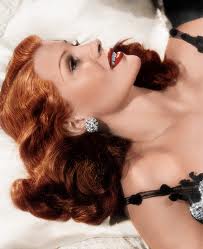 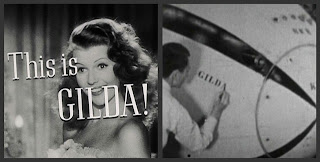 The Bikini bomb test story is true, the story stuck, and she hated it.  According to Wikipedia, “(it) was repeated in her 1987 obituary in The New York Times, which readers relied on as fact. Her husband at the time, Orson Welles, issued a public statement, saying, "...they would be pleased only if this were the last bomb test ever. Hayworth was furious to be used in this way.”  Her friendship with Glenn Ford was special and spanned the five films they starred in plus forty years and numerous marriages.

Glenn Ford was born in Canada as Gwyllyn Samuel Newton.  Ford moved to Santa Monica, California, with his family at the age of eight, and became a naturalized citizen of the United States in 1939. His interest in acting was fine with his father as long as he learned something else to rely on. He listened to dad and according to Wikipedia, “during the 1950s, when he was one of Hollywood's most popular actors, he regularly worked on plumbing, wiring and air conditioning at home. At times, he worked as a roofer and installer of plate-glass windows.” 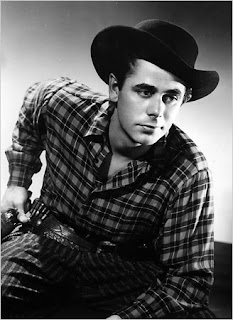 His name came from his hometown Glenford Canada and his first major role was in 1939, “Heaven with a Barbed Wire Fence.”  In between his first major film role and “Gilda” was a good military career doing what he knew best: motion pictures and public relations. But that was not enough military for Glenn, so in 1968 he joined US Marine Reserve and even was in Vietnam in 1967 scouting combat training film locations. 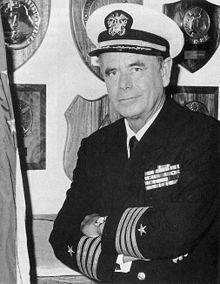 A versatile actor, Ford’s career spanned seven decades and was in high gear in 50s and 60s continuing into the 80s.  As said earlier, his breakout film was also “Gilda” and following that he did everything from thrillers, drama, comedies, and westerns in movies and for television. He worked very hard at his career.  In a 2006 obituary, the New York Times said, “In his heyday, there were times when it seemed that Mr. Ford was averse to vacations. In 1960 and 1961 he worked on four overlapping projects: ‘The Four Horsemen of the Apocalypse,’ ‘Cry for Happy,’ ‘Cimarron’ and ‘Pocketful of Miracles.’ In all, from 1939 to 1991, Mr. Ford appeared in 85 films…” 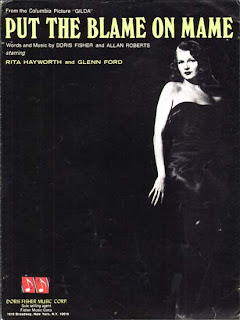 Written as an American Gangster story, the “Gilda” setting was changed to Buenos Aries because of “heat” from the Motion Picture Production Code office.  It even “sparked” riots in Rio De Janeiro by frustrated fans who objected to inflated ticket prices.   This movie is just full of strange happenings before, during and after its creation and you can hear a lot more about “Gilda” by just showing up.  If you haven’t made the drive up to see a movie classic in Bigfork before, you might find this one special. 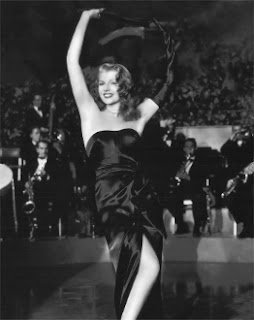 Posted by Edge Center for the Arts at 6:19 AM