A Young Girl In Peril, The Musical-Drama I am Anne Frank at The Edge 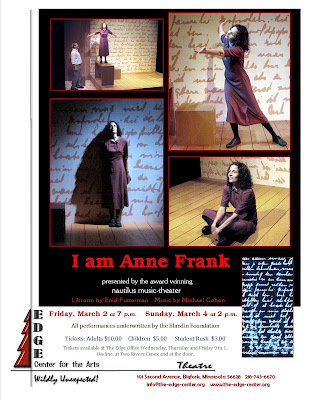 The story of Anne Frank is one of the most widely read of all time. Having it told in a musical-drama is very moving. I am Anne Frank, based on her diary, is a very special look at the way one of millions of young people lived their short lives under the dangers of Nazi rule. How Anne was hidden by friends for 2 years, betrayed by an unknown collaborator and sent to her end is known only because of her diary and the interest it created. The performances, followed by audience talkbacks, are at The Edge Center Theatre in Bigfork on Friday, March 2nd at 7PM and Sunday, March 4th at 2PM. Prices are $10 for adults, $5 for children and $3 for student rush. There also will be a special student performance on March 2nd. 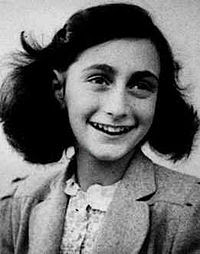 Anne Frank wanted to become a journalist and wondered if she could write well enough. “I finally realized that I must do my schoolwork to keep from being ignorant, to get on in life, to become a journalist, because that’s what I want! I know I can write ...When I write I can shake off all my cares. My sorrow disappears, my spirits are revived! But, and that’s a big question, will I ever be able to write something great, will I ever become a journalist or a writer?” Anne Frank pictured above in 1942 is from Wikipedia (http://en.wikipedia.org/wiki/Anne_Frank), the above quote is from her diary according to Lessons from The Diary of Anne Frank by Harold Marcuse, UCSB August 7, 2002 and tells much about her aspirations. 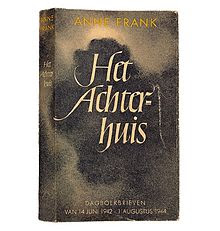 Also from the same site, above is an image of Het Achterhuis (1947), the cover of the first edition of Anne Frank's diary later translated as The Diary of a Young Girl 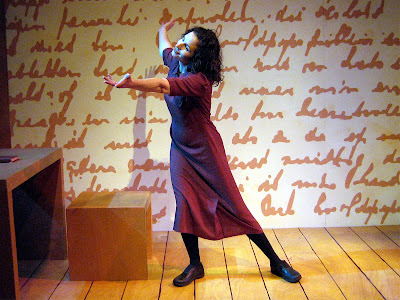 The musical-drama, I Am Anne Frank is based on Anne Frank’s diary. The St. Paul based professional Nautilus Music-Theater brings this production to Bigfork. Since 1986 the theater has dedicated itself to innovative forms of music-theater and opera. Starring singer-actors Vanassa Gamble (pictured above and below) and Joel Liestman (pictured below) with libretto by Enid Futterman and music by Michael Cohen, the I am Anne Frank production has been enjoying excellent reviews from audiences and critics, such as "…capturing Anne’s combination of commonness and exceptional self-awareness…remarkable music, lyrics, and performers…thoughtfully presented...”

The Edge Center welcomes you to try this production as a way to see, hear and experience a different kind of theatre here in Bigfork. 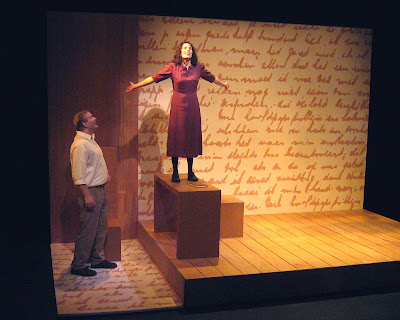 Tickets are available at the Edge Center Wednesdays - Fridays 9am-1:00pm, at Two Rivers Cenex Convenience Store in Bigfork, online at www.the-edge-center.org, and at the door.
Posted by Edge Center for the Arts at 7:57 AM