When Silence is Not Just Quiet 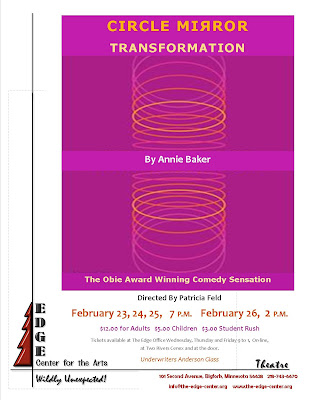 Making silence a key part of a play’s dialogue makes the play Circle Mirror Transformation special. Its creator, Anne Baker, believes silence is an important part of everyday life and can be just as important on stage. Circle Mirror Transformatoin is on The Edge Center Theatre stage in Bigfork Thursday through Saturday, February 23rd to 25th at 7pm and Sunday, February 26th at 2pm. Tickets are $12 for adults, $5 children, and $3 student rush.

Annie Baker grew up in a small town and experienced acting classes at this level. Her play is not typical at all. She uses silence in her plays as an effect that sometimes makes audiences aware of themselves, and sometimes makes them uncomfortable, until they get used to it. 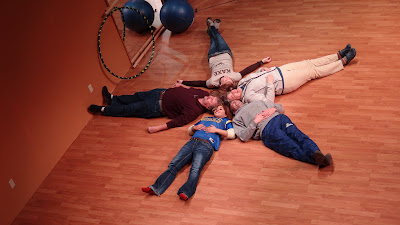 The following is in the Playbill and is from Patricia Feld, Director of the play at The Edge Center, “While theatre groups throughout the U.S. have performed this 2010, award-winning script the EdgeWild Players is only the second theatre group in Minnesota to produce Circle Mirror Transformation. The first was the Guthrie Theatre in 2011. Are the elements of quiet and “theatre about theatre” part of the reason other companies haven’t attempted it?”

“Circle differs from most plays, modern and ancient, in its scripted reliance on silence as part of the everyday, hyper-naturalistic dialogue. Playwright Annie Baker said that ‘when it feels like nothing is taboo anymore — we can have sex and violence on stage and no one blinks an eye — I think the one thing left that really makes people uncomfortable is empty space and quiet.’ We have taken on Baker’s play with its required short pauses, pauses, long pauses, silences, long silences, and very long awkward silences as a challenge to our abilities to ‘fill’ those quiet moments with the real inner lives of the characters. When you next have a very important conversation, you may notice how much of it is framed by silence.” 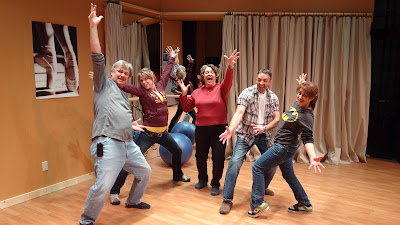 “There are a couple hundred people in our area who have worked in some capacity with plays, but few of us here in the woods know what a Creative Dramatics class is. Why should we be interested in what happens in that kind of a class in a small town in Vermont? Is this a show about ‘theatre people’ self-consciously doing a play about theatre people?”

“This play is successful because it is not about the theatre. It is about five people who simply come to know themselves better, come to know each other much better, attempt to build and restore and maintain relationships, and ultimately bond in a shared experience of human understanding achieved through theatrical exercise and intention.” 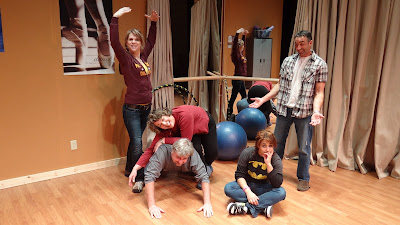 “Besides the actual mirrored wall of a dance studio and a hula hoop, the symbols in the title may be understood as follows: The circle is the place where these people meet. The mirror is the group of theatrical devices that allow them to see themselves in each other, and to see the other in themselves. The transformation is what happens to us in the process of watching them create their own imaginative world in which we also happen to live. (Jerry Kraft of The Seattle Actor.com offered these thoughtful metaphors).”

“Thank you for being here to support live, performing arts, and the work of your friends and neighbors.”

Tickets are available at the Edge Center Wednesdays - Fridays 9am-1:00pm, at Two Rivers Cenex Convenience Store in Bigfork, online at www.the-edge-center.org, and at the door.
Posted by Edge Center for the Arts at 6:05 AM