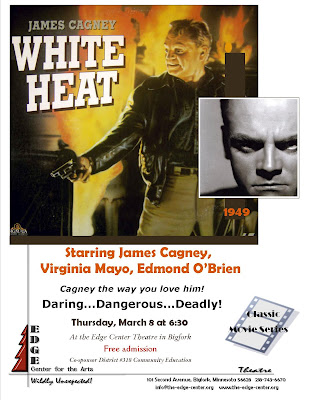 These “tough guys” were all possible inspirations for one of James Cagney’s most notorious villains. Francis Crowly ended up in a 5-hour shoot-out with police at a New York Police station when he was 19 years old. Aurther Barker was the son of Ma Barker of 1930s crime fame, and the robbery of Southern Pacific’s "Gold Special" by the D'Autremont brothers in 1923 probably inspired the railroad robbery sequence in the movie WHITE HEAT. Roll all of these together and you have just part of the mean and angry Cody Jarrett portrayed by Cagney in that movie. It is said to be one of the best gangster movies ever. WHITE HEAT will be shown Thursday, March 8 at 6:30 at the Edge Center Theater in Bigfork FREE and everyone is invited. 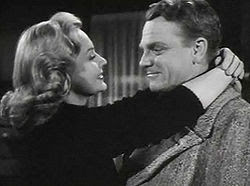 The movie is presented by the CLASSIC MOVIE SERIES with a cartoon from the same year and a background presentation by Jack Nachbar. Here are his thoughts about the film.

“The public loved Jimmy Cagney on the screen because he was energetic, tightly wound, and. most of all, tough, real tough. By 1949, however, it had been ten years since he had played a screen gangster . His return to his signature gangster role in our March Classic Movie, WHITE HEAT (1949), made up for lost time. As Cody Jerrett, Cagney nearly burns up the screen. He is driven, violent and ruthless, exactly what moviegoers longed to see. "Watching Cagney is like watching the lit fuse of a firecracker," is the way one critic put it. WHITE HEAT also features Virginia Mayo and Edmond O'Brien and is ably directed by the fine director Raoul Walsh. But it is Cagney's unforgettable performance that makes WHITE HEAT a movie classic. "Scripted like a Greek tragedy on speed," says TV GUIDE , "one of the toughest and most brilliant crime films ever made."

This movie is not recommended for children or people who do not like violent movies. 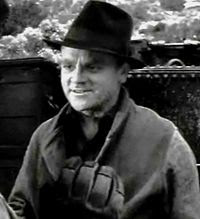 If you want to read more, here is some of the New York Times Movie Review by Bosley Crowther from 1949.

“Warner Brothers weren't kidding when they put the title "White Heat" on the new James Cagney picture, which came to the Strand yesterday. They might have gone several points higher in the verbal caloric scale and still have understated the thermal intensity of this film. For the simple fact is that Mr. Cagney has made his return to a gangster role in one of the most explosive pictures that he or anyone has ever played…”

“For there is no blinking the obvious: the Warners have pulled all the stops in making this picture the acme of the gangster-prison film. They have crammed it with criminal complications—some of them old, some of them glittering new—pictured to technical perfection in a crisp documentary style. And Mr. Cagney has played it in a brilliantly graphic way, matching the pictorial vigor of his famous "Public Enemy" job.
Indeed, as the ruthless gang-leader in this furious and frightening account of train-robbery, prison-break, gang war and gun fighting with the police, Mr. Cagney achieves the fascination of a brilliant bull-fighter at work, deftly engaged in the business of doing violence with economy and grace. His movements are supple and electric, his words are as swift and sharp as swords …”

The following is a movie poster from the period. 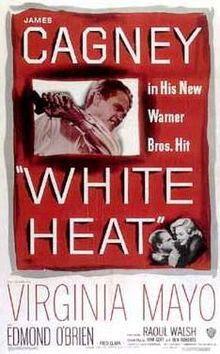 Posted by Edge Center for the Arts at 6:02 AM