SOME LIKE IT HOT - Top Comedy Movie At The Edge Center 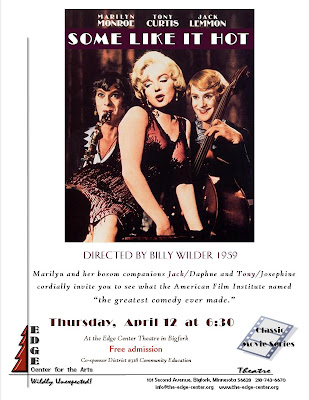 For a movie that was predicted to be a bomb, SOME LIKE IT HOT really showed by how much critics can miss a gem. With a simple plot and lots of comedy talent this movie will entertain you from beginning to end. This is the last movie of the winter series shown at The Edge Center in Bigfork. The movie has lots of music, slapstick comedy, two really great male stars dressed to the hilt as ladies, and Florida sunshine to end up our Minnesota winter. By the way, you might want to just see it and try to figure out why Tony Curtis said kissing Marilyn Monroe was like kissing Hitler. It will be shown along with an informative discussion about the movie at The Edge Center Theater in Bigfork Thursday, April 12 at 6:30 FREE of charge with treats befitting this really funny movie. 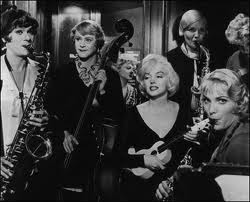 “By the time SOME LIKE IT HOT (1959) finished shooting in late 1958 the movie was weeks overdue, the movie was 10 percent over budget, and director Billy Wilder was a near basket case because of the shenanigans of star Marilyn Monroe. And, on top of all this, the first preview of the picture was an absolute disaster. Hollywood pundits were predicting a box office disaster. Boy, were they wrong! By the end of 1959 SOME LIKE IT HOT had become the most successful comedy made to that time, and the three stars, Monroe, Tony Curtis, and Jack Lemmon, were all in the top-ten list of box office stars. More recently, the film was named by the American Film Institute the top movie comedy ever made. Come and join Tony and Jack as they flee Chicago gangsters in 1929 and join Marilyn and the Sweet Sue’s All-Girl Band.” 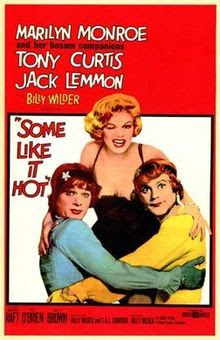 And if you want to read more, here is part of the New York Times review of the movie from 1959. The critic, A. H. WEILER, seemed to both like and hate the effort.

“THERE should be no doubt this morning that the members of the happily irreverent film troupe that made "Some Like It Hot" have done something constructive about the old wheeze that begins, "Who was that lady I saw you with?" For, in fashioning this overlong, occasionally labored but often outrageously funny series of variations on an ancient gag, they have come up with a rare, rib-tickling lampoon that should keep them, the customers and the management of the newly refurbished Loew's State, which reopened yesterday, chortling with glee…" 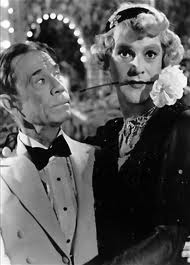 Posted by Edge Center for the Arts at 4:30 PM