The Zorro Photoplay Presented at The Edge 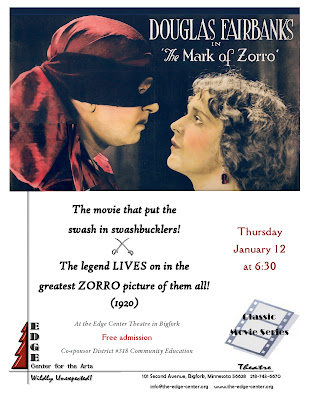 Photoplays, flicks, silent dramas or just movies were what audiences saw before “talkies” took away, what many believe, was the magic of live music accompaniments. And one of the most classy and classic of them all was “The Mark of Zorro”. It defined a genre and, many believe, it is still one of the best action adventures available today even if it is silent. The Edge Center in Bigfork won’t have live music to accompany it, but this very special silent movie will be presented free-of-charge on Thursday January 12 at 6:30PM in the center’s theater. It is part of the Park Theater Memorial Classic Movie Series and will include Jack Nachbar’s background discussions and treats appropriate for a Zorro movie.

This “Mark of Zorro” is a 1920 silent drama starring Douglas Fairbanks and Noah Berry. It was the first “Mark of Zorro” movie. It was based on 1919 story that introduced the intrepid hero. For a more extensive history of the movie come and hear Jack’s discussion. To find out what kind of reaction the movie had in 1920 here is part of the original New York Times review of the movie published on November 29, 1920 in THE SCREEN column of the paper. The photos were not part of the review. 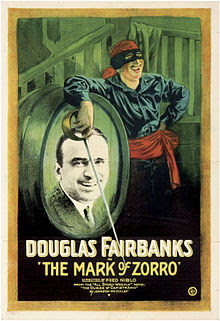 “Douglas Fairbanks's latest motion picture, "The Mark of Zorro," is at the Capitol this week. The program says that it is "from" a story by Johnston McCulley, called "The Curse of Capistrano," but one who has not read Mr. McCulley's story imagines that it is pretty far from it. There's too much Fairbanks in it for any one to have written it without the athletic comedian definitely in mind. What is on the screen is probably "The Curse of Capistrano" spiced and speeded up to suit the taste of Douglas Fairbanks and the many who enjoy his gay and lively style of playing. This means that whatever plausibility there was in the original has been sacrificed for headlong action, that whatever consistency there was has given place to intermittent fun and thrills, that whatever of sentiment there was has become romantic nonsense. All of which may mean that "The Mark of Zorro" is more enjoyable than "The Curse of Capistrano" could ever hope to be.” 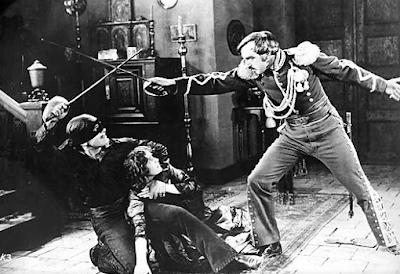 “Certainly there are moments in the motion picture which must delight anyone, no matter how preposterous they are. There is a duel scene, for example, which is something distinctly original in the history of mortal combat on the stage or screen, and there are spirited races and pursuits, sudden appearances, quick changes, and flashes of tempestuous love-making that are typically, and entertainingly, Fairbanksian….” 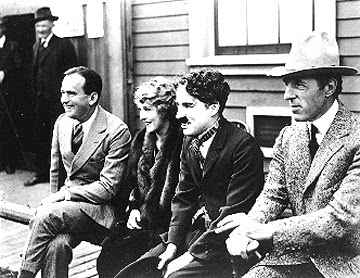 Posted by Edge Center for the Arts at 4:17 PM