A Cello for Your Thoughts in Bigfork 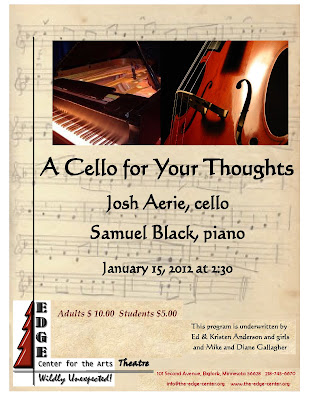 On January 15th at 2:30 PM. cellist Josh Aerie and Pianist Samuel Black will be at The Edge Center in Bigfork for a speical concert. They are active in the Arrowhead area music activities including chamber music performances tailored to take the chill out of a January Sunday afternoon. The prices of the concert are $10 for adults and $5 for students. 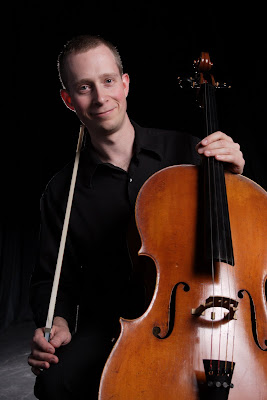 Josh Aerie conducts the Heartland Symphony Orchestra, the Red Cedar Symphony Orchestra, the Duluth Community Orchestra, and the Mesabi Community Orchestra, in addition to teaching cello at the University of Wisconsin-Superior and The College of St. Scholastica. He also teaches music courses at Mesabi Community College and UWS, and directs the Woodland Chamber Music Workshop for adult amateur musicians. He plays the cello at every opportunity and especially enjoys chamber music collaborations with his friends. Josh is a founding member of the Gichigami Trio and is working with Sam to make the premier recording of the
Sowash Cello Sonata. 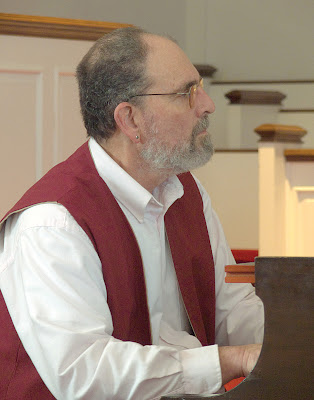 Samuel Black has been involved musically with the Duluth Playhouse, Arrowhead Chorale, Lake Superior Chamber Orchestra, and a wide variety of recitals as pianist, organist, vocalist, & conductor. He organized the Northshore Chamber Society in Lake County and as Music Director at Duluth Congregational Church, he hosts year-round weekly concerts on Thursday afternoons, and monthly concerts throughout the school year. For the past ten years he has also written music reviews for the Duluth News Tribune. Sam is a founding member of the Gichigami Trio and is the Assistant Director of the Arrowhead Regional Arts Council.

Clear Fork is a bluff somewhere around Bellville, Ohio, between Columbus and Akron on I-71.

“The latter work is a musical landscape; the Clear Fork is a branch of the Mohican River, and Bellville, Ohio, the composer's former home, overlooks it. Here, Sowash has written music that is pastoral in a manner reminiscent of Vaughan Williams, and also has shown his affinity for French Impressionism.”

Chamber music with energy on both sides of an incredibly beautiful center. Foote was an accomplished pianist/organist, which is why he didn't write as much as I might wish: he enjoyed performing chamber music, apparently more than writing

This is from American Vignettes for Cello and Piano, a collection of six popular melodies arranged for cello/piano combination. This in # 3 in the collection, and only one that is of British origin, rather than purely American. Delightful way has of interpreting this poignant melody and story.

Rick is our personal friend in Cincinnati, and we are in the process of recording this sonata for him. This is good repertoire that will gain more players in the coming generation. We have had a lot of fun with Rick's humor, as well as his wonderful sense of melody.
Posted by Edge Center for the Arts at 5:19 AM