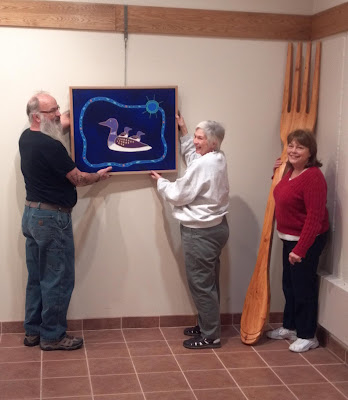 Sure is, and it’s in the Bigfork gallery all winter. With winter finally here in Northern Minnesota, it is time for The Edge Center gallery in Bigfork to change into its winter show. The gallery’s permanent collection is on display from now until the spring and summer exhibits start. During the winter, the gallery is open during theater events and visitors are welcome during The Edge Center’s normal business hours Wednesday thorough Friday from 9AM to 1PM . Gallery visits for groups are also available by special appointment. It might be a nice stop for snowmobile groups. There might even be some hot coffee available for group visits. Call The Edge Center to make an appointment.

As far as the BIG FORK is concerned, it is one of two new additions to the gallery’s permanent collection. It was created by Darren Peterson and donated to the Gallery by Lonnie and Ashley Bommer. In case there is more interest in forks, they have been around since the Roman Empire or possibly earlier in Ancient Greece. They never caught on in the Far East where chopsticks are used for a similar purpose. Personal forks came into use in the Eastern Roman or Byzantine Empire. In the first millenium they spread to, what is now, the Middle East, then onto southern Europe in the second millenium, and finally to North America in the 19th century. When using the fork in these parts one usually keeps the tines pointed up, but, for the continental style, point the tines down. All this is good background, but the one at the Bigfork gallery is probably the largest one you will see.

The other new addition to the gallery is a beautiful blue painting that was purchased from Native American artist Gordon Coons, who had a very fantastic and successful exhibit in October of last year. His abilities in traditional American Indian art impressed visitors. He sold more paintings than any previous individual artist who exhibited at the Edge Gallery. Gordon Coons, because of his Ojibway and Ottawa heritage, has chosen to work in the Eastern Woodland and the Ledger styles. He is a self-taught artist, now living in Minneapolis, and is an enrolled member of the Lac Courte Oreilles Tribe of northern Wisconsin. In addition to exhibiting, the artist taught five classes at the Bigfork School.

Pictured in the gallery set-up are Barry Nelson, Kathy Champoux and Karen Ferlaak

The forks pictured above were made in Iran in the 8th or 9th century and are not in the Bifgork gallery.

The following are a couple of gallery photos including the visitors at a Cello and Piano concert held on Sunday, January 15. 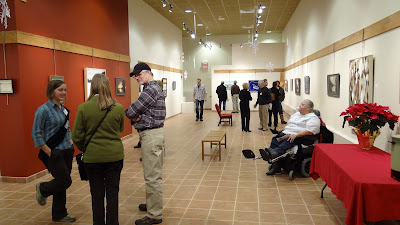 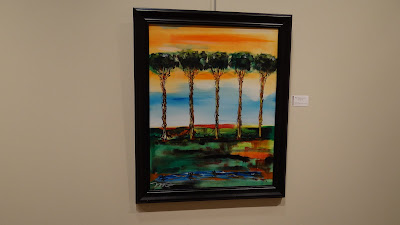 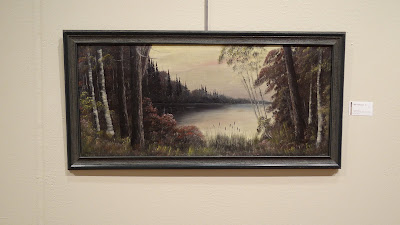 Posted by Edge Center for the Arts at 1:56 PM