Laugh Your Antlers Off 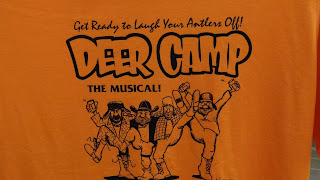 The Edge Center is doing something new…again! Another organization, NOT the local EdgeWild Players, is using the theatre to present their musical. Great North Show Providers is bringing Deer Camp, The Musical to the folks in the heart of deer hunting, north Itasca County! This is the original cast from Bemidji. Written by Gene Jurek with music by Doug Spartz, this show takes four buddies from Elmwood, mixes in plenty of cold beer, lots of songs, a hunting shack, and the only ones safe in the woods are the deer! For years, these mighty hunters have spent all their time in the "hunting" shack doing nothing but shooting the bull and sipping some suds. But this year they have a problem. The guys are under a threat from their wives to "bring home a deer instead of a hangover". What to do to solve this dilemma-shoot one? Buy one? Steal one? They try everything with hilarious results! "Performances are Saturday, October 15 at 7:00 and Sunday, October 16 @ 2:00. Tickets are $23.00 in advance, $26.00 at the door and are available by calling 218-536-0589.
Posted by Edge Center for the Arts at 5:11 PM