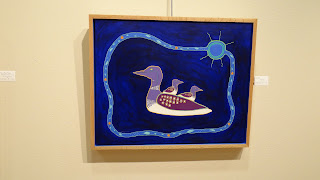 A very colorful and special exhibit of art is at The Edge Center gallery until October 29. On October 28 there will be a free closing reception with the artist from 5 to 7 PM. The exhibit is titled Gorden Coons: Language of Color From My Inner Voice. The artist, Gordon Coons, because of his Ojibwa and Ottawa heritage, has chosen to work in the Eastern Woodland and the Ledger styles of Native American art.

His heritage is Ojibwa from Lake Superior Chippewa Band of Wisconsin (from his father) and Ottawa from Michigan (from his mother). He is an enrolled member of the Lac Courte Oreilles Tribe of northern Wisconsin, who now lives in Minneapolis.

Coons is a self-taught artist, creating works in a variety of mediums including linoleum block prints, paintings, pen and ink, and carvings in stone and wood. Although his artwork is more contemporary, each piece portrays a unique view of traditional native stories, incorporating strong family influences into the image.

Native American art, in general, depicts spiritual power and uses spirit lines that often radiate from the spines of animals or emanate from both the interior and the exterior of animal or human figures.

Coons’ block prints and paintings are often in the Eastern Woodland style. Elements that identify Woodland Art, in particular, are:
1. Figures that are outlined and look like X-rays (animals, fish, birds, plants, and humans).
2. Balls or seeds of spirit power, which often float within the picture, circles, which represent the sacredness of the circle in Aboriginal spirituality.
3. Simple forms outlined in black filled with bright colors that reflect the mood of the painting.

Some of Coons’ acrylic paintings are in the Ledger Art style associated with Plains Indians. It is called that because it is painted on antique ledger paper, the newest of which Coons uses is from 1913. Gordon Coons explains, ”In my ledger art I use the wolf/coyote in his role as a trickster. As with the trickster, I add a component of humor.”

Gordon Coons has been showing artwork at juried shows around the country, including Smithsonian National Museum of the American Indian in Washington, D.C, Indian Art Northwest of Portland, Trail of Tears in Tahlequah, Oklahoma, and Red Cloud Art Show in Pine Ridge, South Dakota. He has won numerous recognition awards in graphics/prints categories since he started showing his work in 1998. His works have become part of many permanent collections of institutions around the country.

Coons has been an artist-in-residence at multiple schools in Minnesota, Wisconsin and Illinois. He will be working with the students of Bigfork School on October 28.
Posted by Edge Center for the Arts at 4:18 PM