“Stories for the Stage”…Presentation of Anne Frank in Bigfork 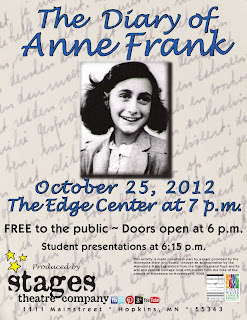 The Stages Theatre Company (STC) of Hopkins presents "Stories for the Stage", an arts-integrated residency and touring project in Bigfork this month. Stories for the Stage provides selected middle schools with 60 hours of theatre arts residency programming. Concluding the arts residency is a free, public performance of “The Diary of Anne Frank” produced by STC. Eight adult actors and two STC perform this professional production. Although this is a school event, the performances will be at The Edge Center in Bigfork. They will be on Thursdsay Oct. 25 with a student performance at 6:15PM and general public at 7 PM

"The Diary of Anne Frank" was selected because it is required reading for many middle school students and the story provides a non-fictional depiction of a period in world history that had a major impact on world history. It also relates to the Minnesota State Arts Board’s desire to increase "understanding of the role that the arts play in daily life". The script for "The Diary of Anne Frank" is well written and time tested, and the film adaptation is also exceptional. Viewing the film provides an additional learning tool for students.

Posted by Edge Center for the Arts at 6:40 PM