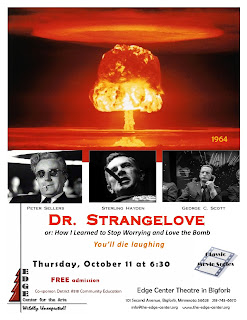 This movie is made to give you belly laughs no matter how you end up feeling about it. “Dr. Strangelove or: How I Learned to Stop Worrying and Love the Bomb” is a black comedy to say the least. Peter Sellers goes above and beyond playing three different bizarre characters that show his comedic talents extremely well. And with costars George C. Scott, Sterling Hayden, Keenan Wynn, and Slim Pickens the film is packed with talent.

Because the movie, released in 1964, is about a mad US General who orders the first strike option on USSR during the cold war, you’d think the movie would include some sanity around to stop him. But sadly most of the other key characters are somewhat unhinged or inept too. Learn more when you see it along with an informative discussion about the movie at The Edge Center Theater in Bigfork Thursday, October 11th at 7PM. The movie is presented by the CLASSIC MOVIE SERIES with a cartoon from the same year and a background presentation by Jack Nachbar. 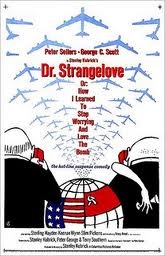 Peter Sellers must have had a ball playing three different characters: Group Captain Lionel Mandrake, President Merkin Muffey and Dr. Strangelove. The director Stanley Kubrick probably had lots of challenges during the production making some sense of the chaos. But then it was his own fault being a co-writer with several others who eventually got into a squabble over who did what for the script. Who really did write Dr. Strangelove is so complicated that this blog would be too long to just clear up that one simple question. You can read more about who wrote it in this blog:


Here is the pie fight final scene that got cut. 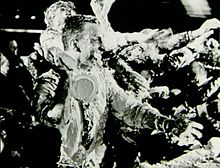 And the whole production thing was chaos too, and probably would make another strange film on its own. Things like having to be made in England because its star, Peter Sellers, could not leave the country, why the final scene was changed from a huge pie fight to a mushroom cloud of the bomb, and how Dr. Strangelove’s black arm with a will of its own came about are some of them. By the way Peter Sellers, as the President tells his staff at one point “Gentlemen, you can't fight in here! This is the War Room.” 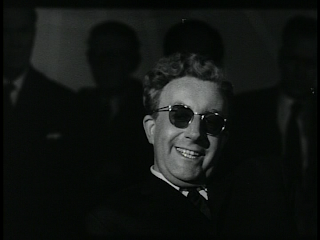 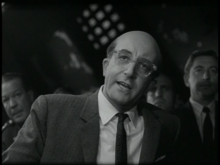 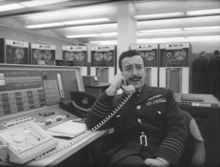 If you need any more reasons to come to Bigfork to see this movie, below read some of what the New York Times reviewer had to say in 1964 and see for your self why he was so frazzled by it. He even called it “dangerous”. Then read what the same newspaper said about it in 2004 with a different reviewer. The movie has passed the test of time and on its 40th anniversary in 2004 was called “…one of the greatest satires in American political or movie history….” Which is a considerable complement from the same newspaper by the different reviewer, Fred Kaplan. “Stanley Kubrick's new film, called Dr. Strangelove or: How I Learned to Stop Worrying and Love the Bomb, is beyond any question the most shattering sick joke I've ever come across. And I say that with full recollection of some of the grim ones I've heard from Mort Sahl, some of the cartoons I've seen by Charles Addams, and some of the stuff I've read in Mad magazine.”

“For this brazenly jesting speculation of what might happen within the Pentagon and within the most responsible council of the President of the United States if some maniac Air Force general should suddenly order a nuclear attack on the Soviet Union is at the same time one of the cleverest and most incisive satiric thrusts at the awkwardness and folly of the military that has ever been on the screen. It opened yesterday at the Victoria and the Baronet.”

Read the rest of the review at:

Dr. Strangelove," Stanley Kubrick's 1964 film about nuclear-war plans run amok, is widely heralded as one of the greatest satires in American political or movie history. For its 40th anniversary, Film Forum is screening a new 35 millimeter print for one week, starting on Friday, and Columbia TriStar is releasing a two-disc special-edition DVD next month. One essential point should emerge from all the hoopla: "Strangelove" is far more than a satire. In its own loopy way, the movie is a remarkably fact-based and specific guide to some of the oddest, most secretive chapters of the Cold War...

Read the rest of the review at:


The War Room from Dr. Strangelove 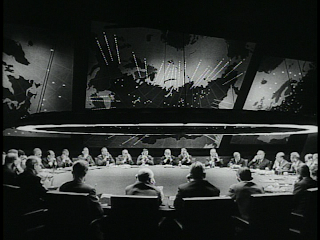 Posted by Edge Center for the Arts at 9:14 AM