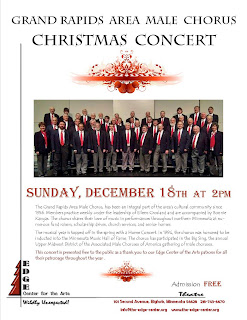 A December 18th holiday music special by the Grand Rapids Area Male Chorus will warm your spirits free of charge at 2PM at The Edge Center in Bigfork. In addition to traditional holiday favorites the audience can expect to hear from a wide selection of musical styles. This fourth annual performance is in appreciation to the center’s supporters of the theater and gallery.

The following photo is of the current chorus

In their 56th year of existence, the group’s mission is to bring good music and joy to their audiences while providing a place, and setting, for a group of men to share their love of singing. They practice weekly under the leadership of Eileen Grosland, are accompanied by Bonnie Kangas, and invite all like-minded men to join with them. The chorus is in the Minnesota Musical Hall of Fame and enjoys the support, through their performances, of communities in several states and Canada.

After a modest beginning in 1953, the chorus was officially organized in 1955. There were 13 original members under its first director Betty Kauppi, and were unofficially knows as Betty’s Boys. In 1956, officers were elected and named the Grand Rapids Male Chorus. By 1957 there were thirty members. The chorus has had four official names over the years. In additional to the original, it was named the Arion Male Chorus, then Blanden Male Chorus, and currently the Grand Rapids Area Male Chorus to reflect its membership being beyond the city of Grand Rapids.

In 1959 the group joined the Associated Male Choruses of America (AMCA), and in November 1994, the Chorus was inducted into the Minnesota Music Hall of Fame with such stars as Judy Garland and Bob Dylan.

The following photos are of the induction poster with the wrong photo in it, and of the chorus about the time of its induction. 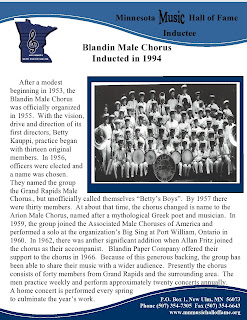 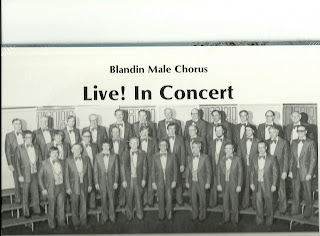 The Chorus is a non-profit organization and usually performs 12 or more times each year for charitable fund-raisers, scholarship drives, civic gatherings, religious organizations, and senior homes throughout the state. They also have performed in Wisconsin, North Dakota and Canada.

A special spring Concert, performed at the Rief Auditorium in Grand Rapids, is the only one with an admission charge used to help sustain operational costs for the next year. They participate in an annual "BIG SING" where all the choruses in the AMCA come together at the location of one of our member choruses and perform as a single chorus. This incredible event is usually about 400 male voices strong. Last spring it was in Grand Rapids.
Posted by Edge Center for the Arts at 1:39 PM