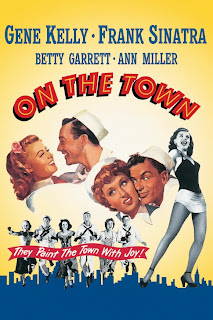 The Park Theater classic movie series presents ON THE TOWN with Gene Kelly, Frank Sinartra and Ann Miller at The Edge Center in Bigfork November 10 at 6:30 PM free of charge. ON THE TOWN, filmed in New York in the late 1940s is one of the best musicals of the period and provides award winning music, dancing and comedy. Over the fall and Winter months you can get out of the weather, warm your spirits and learn some interesting movie history once a month by seeing a great classic and hearing about it with an informative and informal discussion.

If you would like a chance to see New York was in the late 1940s and learn some interesting movie history, ON THE TOWN (1949) is famous as the first movie musical to be filmed on location there. The film explores a great city showing some of its famous landmarks and hidden treasures. Gene Kelly, Ann Miller and Vera Ellen, who is considered the movie’s best woman dancer, keep the tempo high and Frank Sinatra’s singing adds to the mix. By the way the movie won numerous awards including an Academy Award. The movie takes three energetic sailors on a 24 hour leave seeking romance through one of the best productions Hollywood offered during a time great performances by great talent.

From the following parts of the original movie review published by the New York Times and written by Bosley Crowther on December 9, 1949, you can see it was predicted to be one of the industry’s best and it was. “The Music Hall pulled the wrappings off its Christmas show yesterday and revealed a delightful entertainment for all ages, sexes and seasonal moods. It is Metro's crackling screen version of the musical, "On the Town," and a more appropriate all-purpose Yuletide picture would be hard to fashion or find. Gaiety, rhythm, humor and a good, wholesome dash of light romance have been artfully blended together in this bright Technicolored comedy. The holidays should be nicer for having "On the Town" around...”

“From the moment the picture opens, in the actual Brooklyn Navy Yard, with the three sailors cutting off for New York, the whole thing precipitately moves, with song, dance, comedy and romance ingeniously interwoven and performed. With Mr. Kelly playing the role of the principal tar, the excellence of the masculine dancing is immediately guaranteed. And with Vera-Ellen playing the little Manhattanite whom he meets—Miss Turnstile, the Subway Cinderella—his vis-a-vis is assured.”

“These two are deliciously coupled in the singing and dancing of ‘Main Street’ and a new Leonard Bernstein ballet number. ‘A Day in New York.’ As another of the tars, Frank Sinatra finds his soul-mate and comedy relief in Betty Garrett, who plays a taxi driver with an obvious Sinatra yen. Together they comically warble the familiar ‘Come Up to My Place,’ ‘You're Awful’ (a phrase of endearment!) and join jovially in ‘Prehistoric Man.’ This latter is a new item which has been neatly contrived for Ann Miller and giggly Jules Munshin, who comprise the third duo. Assisted further by Florence Bates and Alice Pearce in lesser roles, these six very spirited young people have great fun from ‘On the Town.’ And so do we…”
Posted by Edge Center for the Arts at 8:07 AM