“Gigi” is the December Film Classic in Bigfork 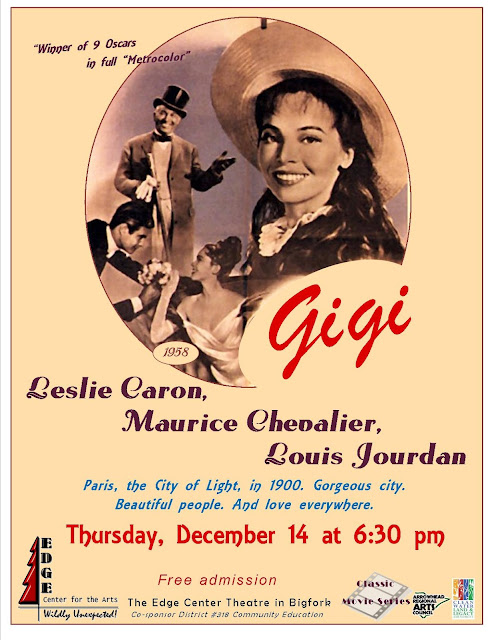 By many, this 1958 movie was the last great MGM musical, and has all the music and romantic suspense to make it a modern day “Cinderella” story.  Set in turn of the 20th century Paris with an outstanding cast, and music that is still well known, “Gigi” should leave you smiling and happy you made the time in Bigfork  to see it. It won a record-breaking nine Oscars, won three Golden Globe awards, and many other honors including being selected for preservation in the U. S. National Film Registry by the Library of Congress. Staring Leslie Caron, Maurice Chevalier, and Louis Jourdan, it had the star power to bring in audiences and provide a nice profit for MGM.  This December Movie Classic will be shown on the big screen of the Edge Theatre in Bigfork by Jack Nachbar. It will be accompanied by Jack’s presentation providing a better understanding of the time period of the movie.  Date: Thursday, December 14th . Time: 6:30PM. Price: free of charge. 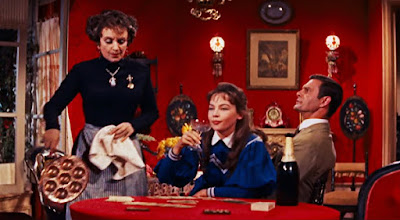 The story is how a young lady develops in the “wife and mistress” life style of at that time. That means a lot of potential pitfalls and heart-breaking adventures can be in the future for the beautiful high society ladies of the period. Well Leslie’s character has to grow up in that environment with womanizers like Louis Jourden’s character and, the wiser and older Maurice Chevalier's character being mentors adding their charms to the mix. Leslie will be encouraged to follow the “family tradition” of the period and be groomed for a life of luxury and heart-aches. The “how” and if she navigates the potential mess is the movie’s story with lots of music, color and beautiful as the backdrop. Come and see the movie, if you want to see what happens. 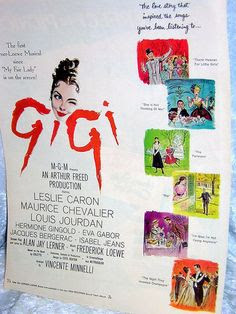 One aspect of “Gigi” that is interesting is that is similar to “My Fair Lady,” the Broadway play running at the time.  The music for both works was done by the same team.  The lyrics for the music were by Alan Jay Lerner and the music by Fredrick Loewe.  There are similarities between the two that can’t be mistaken. This was noted by critics of the period, but by no means in a ways that detracted from their appreciation of the either project.  The movie is great and the play is great. You can read more about this similarity and about the whole film by one noted reviewer, Bosley Crowther, in his period review at: http://www.nytimes.com/packages/html/movies/bestpictures/gigi-ar.html 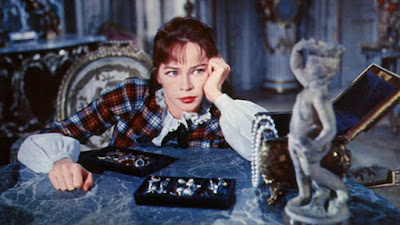 Leslie Caron (1931) is a Franco-American actress and dancer. Between 1951 and 2003 she appeared in 45 films.  She received two Oscar nominations, won an Emmy and is fluent in English, French and Italian. As a dancer, she is one of the few professionals who has danced with, Gene Kelly, Fred Astaire, Mikhall Baryshnikov and Rudolf Nureyev.

Leslie is a cat person and had her own cat during the filming of “Gigi”.  The cat which the director wanted to use in the movie had a particular dislike for Leslie and had to be drugged during scenes with her. This is obvious in the scene with the song “Say a Prayer for me Tonight.”

Maurice Chevalier (1888-1972) was an actor, singer and entertainer. His first working job was as an acrobat until a serious accident ended that with singing and acting taking its place. Wounded and captured in WWII he was in a POW camp where he learned English.  After the war he returned to acting and, with talkies coming on the scene, he went to the for work in .  Back to Europe, he worked in the business until, when he was in his 50s, he returned to the and as a graying gentleman he acted and sang in “Gigi”. 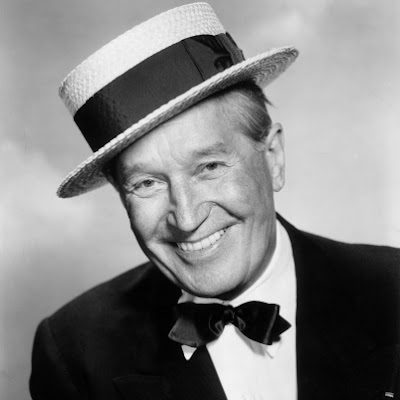 He received a special Oscar for is work in the industry and his last song in a movie was for Disney’s “The Aristocrats.” 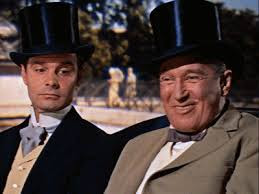 Louis Jourdan (1921) born in was educated in , and .  He received acting school training in and in 1939 got his first acting job. He refused to work for the Nazis during the war and joined the resistance instead.  In 1948 he came to the by invitation of David O. Selznick for the movie “The Paradine Case.”  He had a limited career due to the roles offered him as a old-fashioned Continental lover. 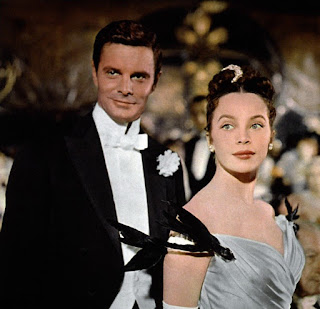 He never watches his own movies. He says “I’m proud to be a Frenchman, but I resent the image people have of the stupid continental charmer…Any actor who comes here with an accent is automatically put in roles as a lover…” 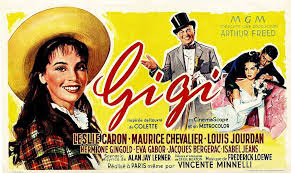 So come enjoy a great romantic musical on the big screen of the from the golden years of .  Place: The  for the Arts, Bigfork. Date and time: Thursday December 14th  at 6:30PM. It will be worth going to Bigfork, because Jack will provide you with background about the movie and a cartoon of the period. An appropriate snack will be served courtesy of Jack and his wife/projectionist, Lynn. 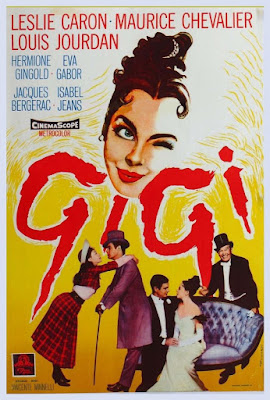 Posted by Edge Center for the Arts at 7:29 AM