Ever Want to Change Your Whole Life? 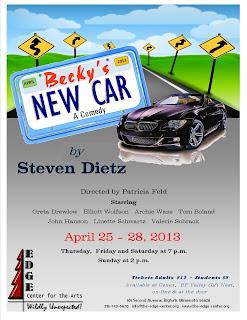 Becky’s New Car shows what happens to an every day sort of person given the chance to “try” a new life.  She isn't really unhappy about the life she has now, but, like a lot of people, wonders “what if?”.  She gets that chance when a millionaire walks into her car dealership and her life.  This is a funny, fast-paced, and entertaining look at events for Becky and the people around her in the new play at The Edge Center in Bigfork. Becky’s struggles with the situation make her face the realities of her life and decide on her future. Performances are April 25 – 28: Thursday through Saturday at 7PM and Sunday at 2PM.  Price $12 for adults. 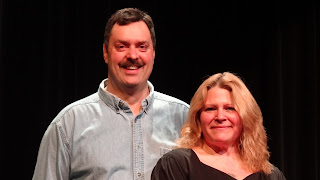 Becky Foster is an ordinary person working in a car dealership dreaming about that “what if” question.  Her husband is a hard-working, honest, down-to-earth roofer who loves her dearly…and she loves him.  Pictured above Becky and her husband Joe who have a family, nice house, and all that goes with it.  But still she feels at a dead end when her latest car customer lets her test drive a new life. 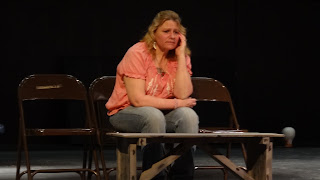 Becky Foster played by Greta Drewlow is a forty-something woman in a mid-life crisis. Becky works for a car dealership. 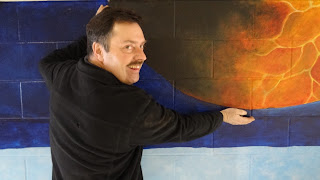 Joe Foster played by Archie Wass is a forty-something roofer, who is a good husband that means well but is settled in his ways. 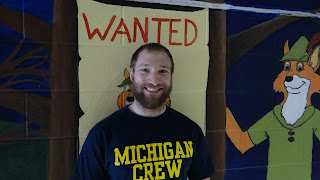 Chris Foster played Elliot Wolfson is Becky and Joe’s mid-twenties son who is a psychology student and lives in their basement. 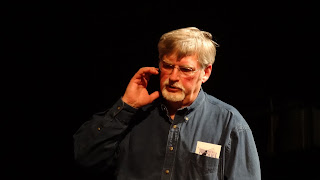 Walter Flood, played by John Hanson, is a wealthy businessman.  He is in his late 50’s, widowed, and looking for a second relationship. 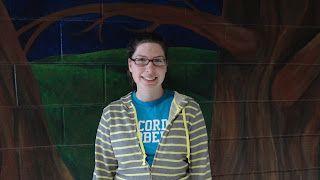 Kenni Flood played by Linette Schwartz is Walters’s mid-20’s daughter.  She is a bit on the spoiled side. 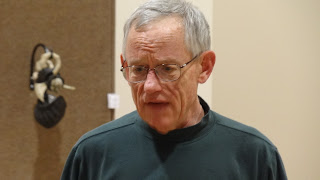 Steve, played by Tom Boland, is a widowed, 50ish car salesman who works with Becky.  He wants a better job at the dealership. 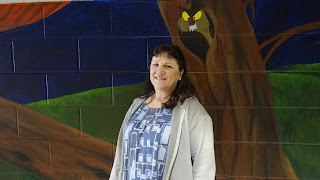 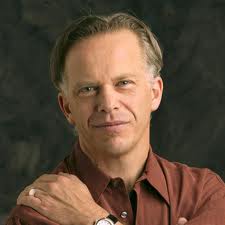 Steven Dietz, above, wrote the play as a birthday present for a friend’s theater-going wife. The friend is Charles Staadecker, and his “present” was a hit for his wife and the public too.  They have seen the play over 100 times around the country and are challenging organizations to follow suit and commission plays. 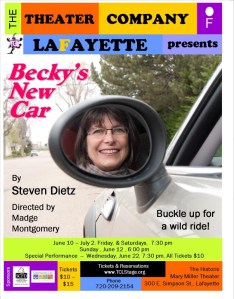 Becky's New Car had its world premiere on October 23, 2008 in Seattle and has kept audiences laughing ever since.  It won a Steinberg/American Theatre Critics New American Play Award for a play that opened out side of New York.  Dietz placed eighth on the Top Ten Most Produced Playwrights in America. 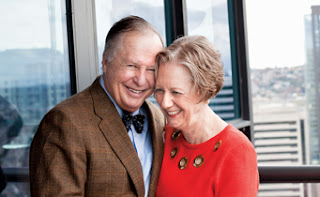 Charlie and Benita Staadecker Created a lasting arts legacy with this play.  As Charlie says “You can choose to buy a new car, or throw a big anniversary party, or pay for a legacy work of art. What footprints do you leave in the sand?”

In a letter from Charlie to The Edge Center, he said, “we had no idea at the time what a journey we would take...and to date we have seen the play over 115 times in 27 cities…each production having their own interpretive feel.”

“Blessed with a hit, we became evangelical about commissioning (plays)...and am happy to report 20 new plays are currently underway, funded using the Becky model.  And amazing at it is, the great professor emeritus Oscar Brockett in his 10th edition "Play Anthology" a textbook used by theatre and drama majors across the country included Becky's New Car; so Deitz is now alongside Moliere, TS Elliot, Oscar Wilde etc.....”

“We are so very pleased you (The Edge Center) selected Becky...it’s a story that will not only laughing throughout the performance, but has enough gravitas to be a story that universally resonates.” 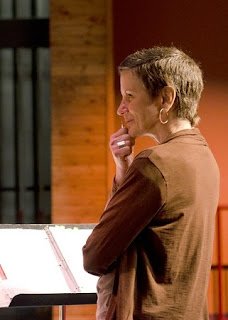 In answer to a couple of questions about the play, Patricia Feld, Artistic Director of The Edge Center, says, "It was really time to do a comedy in town, and I went looking for scripts that were first funny, but weren't sophomoric, dated, or had all male roles.  Then finding Becky’s New Car, I fulfilled those requirements, plus added a new genre for the Edge, a modern comedy of manners, aka farce.”

Why is this play a good fit for The Edge?  "It's probably such a popular community theatre piece because it's so funny, has a small (7 member cast), and simple set requirements.  But I have to wonder how well theatres are performing its fast-paced, running all over the theatre, frantic timing.”

Will The Edge ever commission a play "I do believe that arts organizations owe a debt to past artists by commissioning new works for future generations, but the Edge has yet to find the funding to commission any new plays."

What should the audiences look for? “A challenging production that requires fast entrances, exits, costume changes, and well-timed laugh lines.  It’s a smart comedy whose characters are pretty well rounded, and they’re all really ‘nice’ people, one of whom makes a bad choice, tries to live with it, and does some growing.  We have a new stage set-up that’s fun…and look out for the leaky roof.”

Come and see the newest play at the Edge and find out what Becky decides for the “rest” of her life and what Patty means by the leaky roof.