“Monte Walsh” Western Movie At The Edge Center In Bigfork 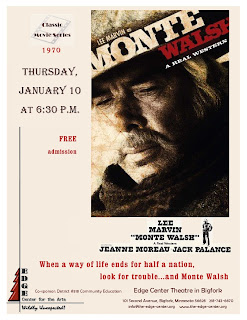 How can it be that the 1970 movie “Monte Walsh”, acknowledged to be one of Lee Marvin’s best performances and with a beautiful haunting score sung by none other than Mama Cass Elliott, end up so well hidden in film history? This is a movie about changing times involving conflicted people in a classic tragedy. Leave it up to the Park Classic Movie folks in Bigfork to find such a gem this month. Viewers will leave with the music score in their heads, the story on their minds and possibly some answers to why this classic didn’t garner awards instead of obscurity. Learn more when you see it along with an informative discussion about the movie at The Edge Center Theater in Bigfork on Thursday, January 10 at 6:30PM. The movie is presented by the Classic Movie Series with a cartoon from the same year and a background presentation by Jack Nachbar. 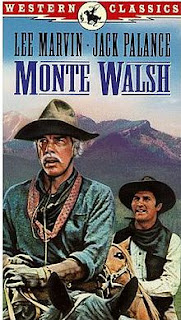 It could be that in 1970 the country had lots of issues on its agenda, and a good western about the end of the cowboy era did not fit the times. When a made for TV remake was done with Tom Selleck in 2003 it received an Emmy Award nomination for Outstanding Sound Editing and, in 2004, the Western Heritage Awards Bronze Wrangler for Outstanding Television Feature Film. But you still need to go back to the original to get the Lee Marvin touch. 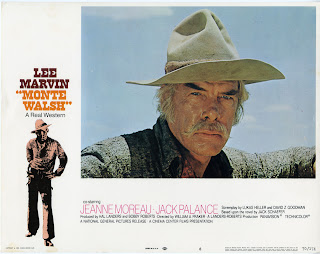 In the movie, Monte Walsh (Lee Marvin) and his friend Chet Rollins (Jack Palance), two long-time cowhands, will do whatever ranch work comes their way, but "nothing they can't do from a horse". 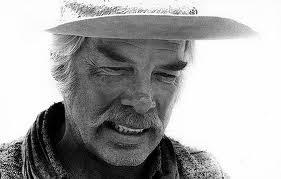 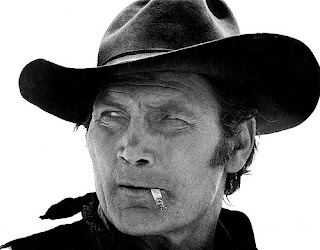 "Monte Walsh" is all about the two aging cowboys who have a hard time dealing with the end of open ranges, cowboy work, and the “wild” in the Wild West going away. To get a glimpse of what that era was like, look at some of the work of America’s own western artist Charles Russell (paintings below). About the film and Charles Russell, Jack Nachbar says, “I think the film comes closest to his work. Charlie was a working cowboy, much like Monte and Chet.”

Known as the “cowboy artist,” Russell’s more than 2000 paintings showed the life of cowboys and Indians along with landscapes in the Western United States and Alberta Canada. In his life he was a working cowboy, and he lived with the Blood Indians, a Branch of the Blackfeet nation.  In his life as an artist, Russell (below) was a painter, sculpture, and author. 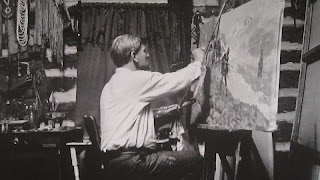 Charles Russell came to Montana in 1880, left for a brief period returning in 1882 and remained there for the rest of his life. “Laugh Kills Lonesome” (below) is probably Russell’s most famous painting and recreates the beauty of a night under the stars. The other images following show more of the cowboy life. 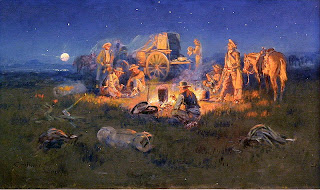 "Bronc for breakfast" (below). 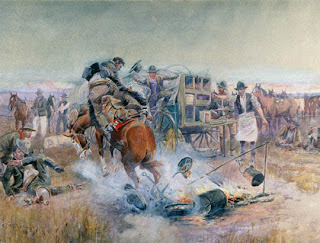 "Russell and friends" (below) was also used on a Montana stamp. 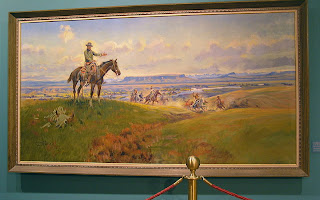 These Russell images will just help set the tone for the movie “Monte Walsh” and Monte's lifestyle. You need to see this special showing of this hidden gem to understand more about “Monte Walsh” the person.  The movie may bring a real tear to your heart for the by-times your remember. Share this great classic and some treats picked especially for the film.

Russell's painting "Loops and Horses are Surer than Lead" (below) is one more look at his view of the cowboy life. 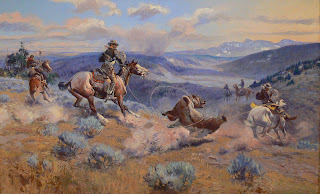 Posted by Edge Center for the Arts at 7:06 AM