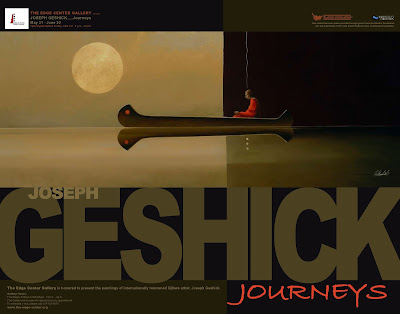 A special collection of Native American artist Joe Geshick paintings, mostly from private collectors, will be at the Bigfork Gallery this summer. The paintings, along with working sketches and notes, may be the only public showing of this work. Most of the paintings have never been seen in public before and will return to private collections after the exhibit. JOE GESHICK/JOURNEYS will be displayed at The Edge Center Gallery in Bigfork, MN on Thursdays through Saturdays 10AM to 4PM from May 31 to June 30. There will be an opening reception June 1 from 5PM to 8PM. Admission is free.

Title: Feeding tf life.” he Spirit... From the artist “The feeding is the offering of tobacco to the spirit of the water before taking from it. Through this offering, men and women feed their own spirit and make the connection with all creation. The three dots represent the man’s spirit and the large circle represents God. In this painting the man in the canoe is holding tobacco in his hand. Throughthis offering he maintains balance in a good way between the dark and light sides of life. 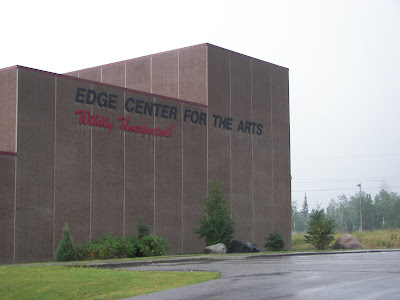 The exhibit of Joe Geshick’s paintings is a difficult one to assemble, but LeeAnn Geshick, the widow of the artist, feels it is important as a tribute to her husband’s legacy. She also wants it to be held in his traditional homeland of Northern Minnesota. The Edge Center and LeeAnn give a very special thank you to the private collectors who make this exhibit possible. This will be an extraordinary example of Native American art done by an extraordinary Native American artist. 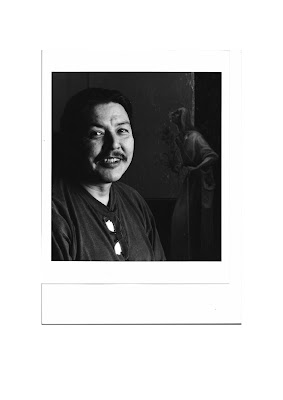 Ojibwa artist Joe Geshick was born near Faribault Minnesota in 1943, grew up near Nett Lake, was a member of the Bois Forte Band of Chippawa, and died in 2009. Between those dates, this artist’s journey took him above an early life of adversity to find his life’s work in expressing his heritage and spirituality in remarkable paintings. Learning to paint in prison, it is said he “painted his way out”. In the late 1970s he studied art at the Art Students League in New York, was a teacher in Lac La Croix in Ontario Canada, and in several Indian tribes in Nevada. His body of work includes some 1200 images with many used as book covers. He ended his journeys in Ely where he did the majority of his work in his studio. 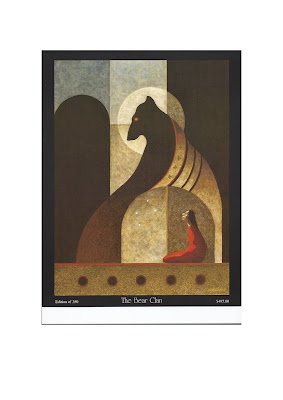 Title: The Bear Clan... From the artist “I dedicate this painting to an Ojibwa medicine man referred to as old man Burnside, who during my childhood years gave me the Indian name Mishakeetameesh, meaning a bird coming down from the sky. This old man was from the Bear Clan who lived on the Nett Lake Indian reservation in northern Minnesota.”

Joe Geshick’s painting express and explore his traditional and spiritual Ojibwa heritage. He described his style of work as semiabstract realism that often reflects traditional sacred Indian ceremonies with some elements that are more symbolic and others that are more realistic. His art, created in sparse compositions of layered paints using only six sacred colors of red, yellow, black, white, green and blue reflect a calmness and beauty that can only be appreciated when viewed in person. Often seen in his work, the circle represents the Creator or God and wavy lines represent communication lines to the spirit world such as stories, songs and ceremonies. Title: Stone People... From the artist “Stone People spirits enter a person’s home to leave a gift – usually a small stone of some kind. The recipient of this gift will add it to his or her alter or medicine bundle and use it in a good way for ceremonial reasons.” Earlier Native Report did a television segment on Joe Geshick. For a look at this story, go to this URL: http://www.wdse.org/shows/native/watch/season-7-episode-14 And, for additional reading, the Associated Press did a profile of Joe Geshick. That profile appeared in the Art section of The Epoch Times in April of 2005. To see this story in total go to this URL: http://epoch-archive.com/a1/en/us/bos/2005/04-Apr/04/B7.pdf
Posted by Edge Center for the Arts at 5:28 PM