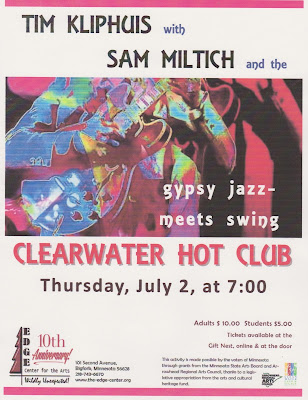 “Tim Kliphuis with Sam Miltich and the Clearwater Hot Club” presenting a mix of gypsy jazz, folk music, American swing, and Latin music will be at the Edge Center in Bigfork on July 2nd. We have seen The Clearwater Hot Club trio of Sam Miltich, lead guitar, Mike Miller, drums and rhythm guitar, and Mathew Miltich, upright bass, but this time Sam brings some overseas talent in Tim Kliphuis. Sam and Tim met in Augsburg Germany with Tim coming to play with Minnesota-based with Sam’s Clearwater Hot Club based in Grand Rapids. The four-member group is touring the area and Bigfork is fortunate to be one of the performance locations. The performance is Thursday, July 2nd on The Edge Center stage at 7PM. Prices are $10 adults and $5 children. 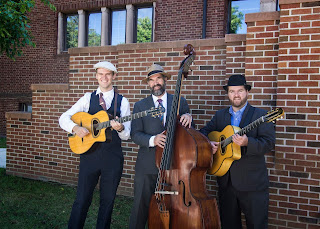 For this performance the Clearwater Hot Club represent the group’s rhythm section featuring Tim as soloist. Through his work with Gypsy Jazz musicians worldwide, Tim Kliphuis is a sought after soloist. He maintains a busy touring schedule around the world incorporating his special style encompassing many genres of music. 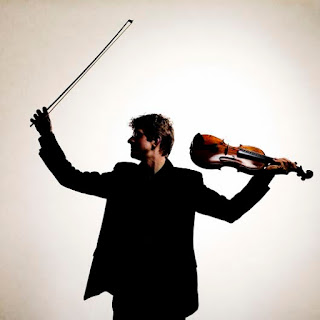 Tim is also an avid educator with his workshops featured at festivals, conservatories and summer classes in many parts of the world. Tim Kliphuis is professor of Jazz violin at the Conservatoire of Tilburg, Holland and holds the Jazz violin chair at Tilburg Conservatory. This is along with hosting the annual Grappelli-Django Camp in Holland in August each year.

Sam Miltich, a Gypsy Jazz guitarist by profession, is well known to the Edge and is returning. Sam (above) plays regularly as a soloist with his band “Sam Miltich and the Clearwater Hot Club.” Born and raised in Minnesota’s north woods Sam has musical interests beyond gypsy jazz including Brazilian choro, French musette, Eastern European tamburitza, and other forms of traditional folk music. Early, Sam’s musical interests included Duke Ellington and George Gershwin. He started playing music early in his life and by the age of 13, guitar became his instrument of choice. He toured widely in the U.S. and Europe with a variety of groups before “The Clearwater Hot Club.” Dutch violinist Kliphuis is but one of a variety of soloists with whom you will see and hear Sam playing. 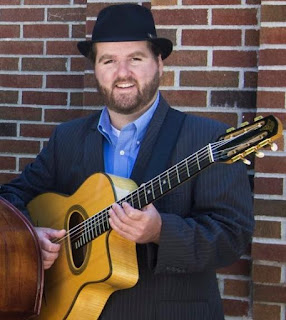 From the Grand Rapids area Mike Miller (above) is a multi-instrumentalist specializing in voice, drumset, and guitar. Mike studied music most of his life with piano being first in his elementary years then percussion and voice in junior high with guitar in senior high. At studied music at Moorhead State University and St. Cloud State University and after taking two European tours with university choirs, Mike started playing music professionally. A rock ‘n’ roll specialist, Mike’s music was with groups in Minnesota, neighboring states and Alaska before coming home. His focus if now gypsy jazz on guitar and drumset. . 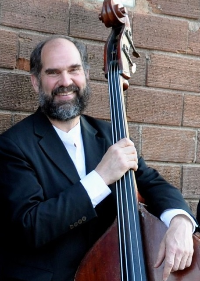 Bassist Matthew Miltich (above) is Sam’s father and comes from musical parents. His career as a jazz bassist began in earnest when his son began to perform professionally and asked Matthew to accompany him. Matthew has played jazz in a variety of venues, as far away as Japan, and as close as his hometown of Grand Rapids, Minnesota.  He’s performed in jazz clubs and toured with vocalists in Canada and from as far east in the U.S. as Eastport Maine, west as Puget Sound, in pubs and coffee houses and concert halls.  He holds four college degrees (two Bachelors degrees, two Masters degrees) in language, literature, and writing, but as a bassist is essentially self-taught. 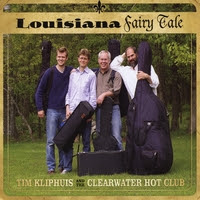 In a Duluth News Tribune review of a Sam and Tiim CD a reviewer said, “Dutch violinist Tim Kliphuis and Grand Rapids guitarist Sam Miltich sound just like a modern-day version of Stephane Grapelli and Django Reinhardt. They have it all: touch, tone, time, phrasing and note choices all in the exact tradition of the masters of Gypsy jazz. Plus, they do it without direct and overt copying. It's more like these two have this style so deeply imprinted in their blood and bones that it's second nature. It's not an affectation, not even an adopted mode.” 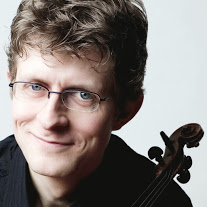 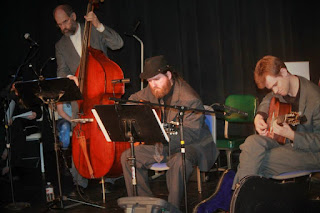 So for a chance to see “Tim Kliphuis with Sam Miltich and the Clearwater Hot Club” presenting a mix of gypsy jazz, folk music, American swing, and Latin music come to the Edge Center in Bigfork on July 2nd. With the popular Clearwater Hot Club enhanced with the talents of the Dutch Soloist Tim Kliphuis this is sure to be an evening of wonderful entertainment. The performance is Thursday, July 2nd on The Edge Center stage at 7PM. Prices are $10 adults and $5 children.

Posted by Edge Center for the Arts at 7:11 AM