Front Porch with Built-in Music at The Edge In Bigfork 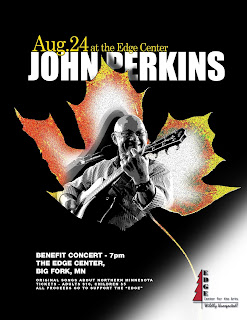 The front porch will be on stage and the music will be from John Perkins on August 24th.  It will be the fifth visit by the local song writer/performer this year.  All the music will be his and all the proceeds will go to The Edge Center. He calls his music style “Americana/folk” and it celebrates life in the north woods along with exploring personal feelings and life challenges. Musicians from Effie and Deer River playing bass, washboard, tambourine, and a Cajon drum box will join him on stage plus his wife playing spoons and doing a little clogging. The Edge Center in Bigfork Saturday August 24.  Show time 7PM. Admission $10 adults $5 children. 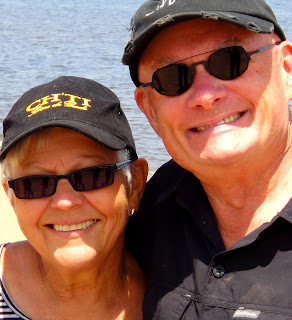 John (shown above with his wife Sandy) says, “I hope the audience will feel like they are sitting in the front yard of a typical home.” The stage set will be a front porch and the first song will be a new one, "My Front Porch." The musicians  from Deer River play bass, washboard, tambourine and bass player is Jerry Hagen from Effie. 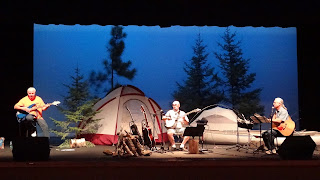 Last year it was a campsite on stage (above), this year a front porch…next year?  John Perkins, shown below in an earlier Edge performance, started playing the guitar in the 1960s and wrote his first song, “Cabin in the Woods,” in 1999. He splits his time between his summer cabin in northern Minnesota’s Chippewa National Forest and his winter home just south of Asheville, North Carolina. 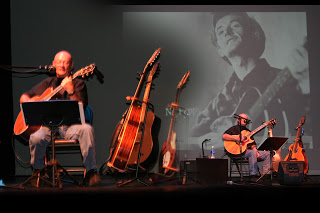 John Perkins says about writing, “Everyone approaches his craft a little differently, but it all comes down to ‘WRITE WHAT YOU KNOW.’...everyone has a song...For some it’s literally music and for others it’s playing of one’s non-musical talents: kindness, caring, mentoring and so on." 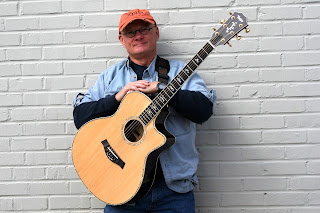 About the music, John continues,  “many of them have historical underpinnings specific to Northern Minnesota.  ‘Albert and Ester’ is the story of homesteaders right here on the shores of Sand lake where I live. Below is 1939  photos of Little Sand lake school with its eight students and teacher.

There where were lots of other early arrivals on Sand Lake including Albert and Ester. For instance, William and Mary Schultz homesteaded on Sand lake in 1906/1907, got the first teacher in the area by enrolling Native Americans along with three of their children and also founded the Lakewood lodge. 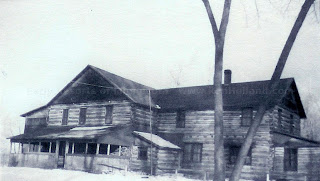 Guests arrived in Deer River by train where Albert met them by horse and buggy for the two day trip to the lodge (vintage photo above). The lodge is still going strong.  Above photo of the lodge in 1925 from the Lakewood Lodge web site. 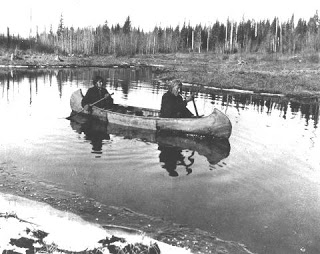 Another of John's songs is "Chief Busticoggan". It is a story of possible gold buried by a colorful Obijwa who lived his life along the Bigfork river.  Pictured above is Busticoggan in the front of the canoe, who it is said was paid in gold for timber and, after his death, the gold was never found.  It might be buried somewhere in Itasca county.

According to John, “ Some songs are just fun. ‘Sugar Tree' always makes me smile. Every time I sing it, I can almost taste the Maple syrup my neighbor makes every spring.” Maple syrup gathering was a tradition of Native Americans (above) before European settlements with uses including the preparation of venison.  They were the first groups known to harvest the delicacy and it all started in the north east part of North America making both maple syrup and maple candy.  They celebrated the Sugar Moon (first full moon in the spring) with a Maple Dance.  The sweet syrup replaced the salt spicing tradition in European cooking. 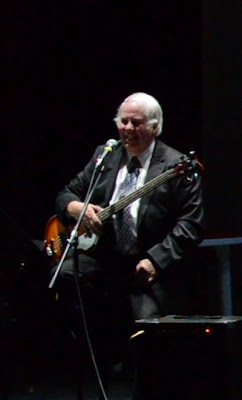 For this performance Effie’s Jerry Hagen is once more on bass on The Edge Center stage.  Jerry has been part of the music around the area for years. He regularly contributes to The Edge Center events in addition to playing whenever and wherever his smooth or rock-n-roll sounds are needed. 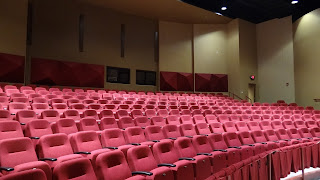 All are invited to a great evening of local music and fun on Saturday, August 24th at The Edge Center in Bigfork.  The Edge Center theatre was built just for such occasions with acoustics professionally designed, comfortable seating and a special visual treat always available on display in the attached art gallery. 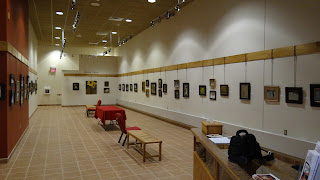 This month you can enjoy “en plein air” works by Derek Davis primarily done in watercolors and oil expressing his passion for scenes found in nature and our lives as we live them the out-of-doors.