“Love Loss and What I Wore” on Stage in Bigfork 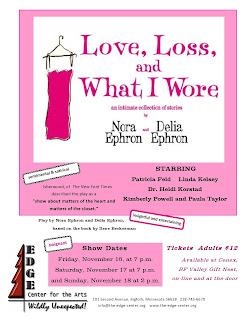 A comedy about how women’s clothes dress up life’s events is what makes “Love Loss and What I Wore” special. The Edge Center, known for presenting the unusual and uncommon, presents a play that explains that, to really understand women, one needs to understand what they wear and why. By adding St. Paul’s Linda Kelsey with her well-known acting talents to a dynamic mix of local performers plus a new-comer,  you have an unforgettable cast-mix and play. Performances are at The Edge Center in Bigfork on November 16-18 at 7PM on Friday, Saturday and 2PM Sunday. Admission is $12 for adults.

The stage waits for "Love Loss and What I wore". 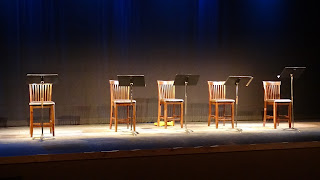 Rehearsals are in progress. 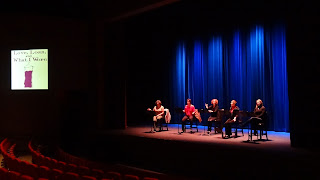 Written by Nora and Delia Ephron, it is based on the 1995 book of the same name by Ilene Beckerman. A cast of five principal actors performs a series of monologues discussing topics like relationships and wardrobes and the interaction of the two. The production won the 2010 Drama Desk Award for Unique Theatrical Experience as well as the 2010 Broadway.com Audience Award for Favorite New Off-Broadway Play. Nora Ephron (Academy Award nominee for Silkwood,” “When Harry Met Sally”, and “Sleepless in Seattle”) and her sister, Delia Ephron, with whom she co-wrote “You've Got Mail”, “Hanging Up”, and “Bewitched”, collaborated on this show. Nora has said that it “is not about fashion; it is about what clothes really are to us, those moments when we are constantly trying to find our identity through them" 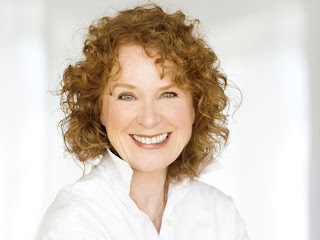 The cast is made up of two close theater friends, Linda Kelsey (above) and Patricia Feld (below), along with a team of medical professionals from the Bigfork Valley Hospital and Clinic, Heidi Korstad, MD, Kimberly Powell, RN and Paula Taylor, Pharmacist. 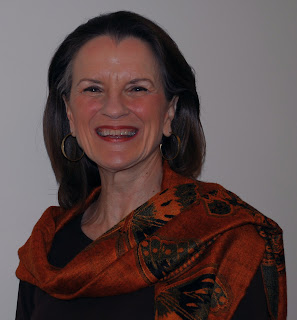 Linda and Patty have been friends for decades meeting at the University of Minnesota while performing in the play “Tom Sawyer”. Linda was Becky Thatcher and Patty the minister’s wife. They have remained close friends ever since. The first time Linda performed in Bigfork was in “The Bell of Amherst”, then in “The Lady With All The Answers”, directed by Patty. Returning the favor, Linda directed Patty in “Wit”. This will be the first time they will be on stage together since college. 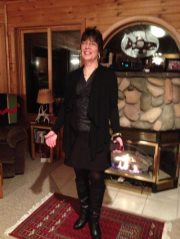 The Bigfork Valley trio includes Dr. Korstad (above), a physician in Bigfork for over 20 years, who will be making her on-stage debut. However she has been an indispensable talent for The Edge Center from its beginning as Technical Director and lighting expert. Kimberly Powell was an EdgeWild player in “Mary, Mary” in 1998 and many other plays including, “Circle Mirror Transformation” and “The Laramie Project”. Paula Taylor has appeared as an EdgeWild player since 1997 in “Ah, Wilderness!” and many others since then including “Three Tall Women”, “Fiddler on the Roof” and “Circle Mirror Transformation”.  The following picture is from "Three Tall Women" showing left to right, Paula Taylor, Patty Feld and Kinberly Powell. 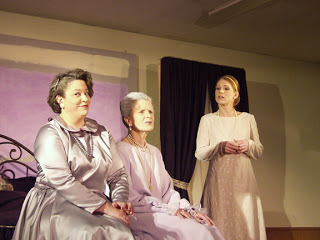 Patricia Feld, Artistic Director of The Edge Center says, “It was time to do a comedy, but it had to be a smart, sophisticated one that met The Edge criteria of being different. This play was recommended by Linda Kelsey and passes all the tests wonderfully. It’s a hoot of a play that’s a series monologues and one-liners just like women chatting together. It has been shown on six continents in over eight countries. This is one you should see because it is unforgettable and you will keep it with you for a long time whether you are a man or woman.”  Below is another view of rehearsals for The Edge performance of  "Love, Loss and What I Wore." 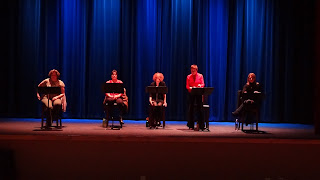 In case you have not heard enough to encourage you to come to Bigfork and see this play here is part of a review by the New York Times when it included Rosie O’Donnell in the cast.


THEATER REVIEW
'LOVE, LOSS, AND WHAT I WORE'

Spandex Agonistes: Why Don’t You Try It On?

Below is the cast in New York with Rosie O’Donnell. 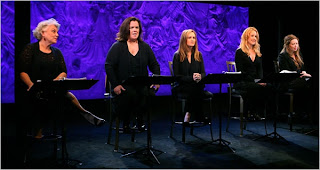 I have always been happy not to have to carry a purse, but I am happier than ever at this lifelong good fortune after hearing Rosie O’Donnell describe the soul-scarring humiliation of possessing a messy handbag in “Love, Loss, and What I Wore,” a new show about matters of the heart and matters of the closet that opened on Thursday night at the Westside Theater.

Written by Nora and Delia Ephron and based on the book by Ilene Beckerman, the show is a scrapbook of stories about unfortunate prom dresses, the traumatic lighting in fitting rooms, high heels, short skirts and the existential state of having nothing to wear. Accessorizing these tales — which are mostly comic but often sad or sentimental too — are the mothers who disapprove, the men who disappear, the sisters who’ve got your back.

If there are chick flicks and chick lit — derogatory though some might find those terms to be — “Love, Loss, and What I Wore” should clearly be classified as chick legit. (In old-school parlance, legit is shorthand for the legitimate theater.) Breezy and perfectly enjoyable for the stray men in the room, it’s like a big bowl of buttered popcorn (but calorie-free!) for the women who can share deeply in the particulars of experience dissected and discussed…

For more see the whole review at:

Below is a final view of The Edge Center cast. 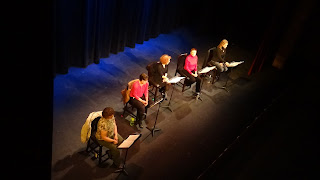 Posted by Edge Center for the Arts at 6:27 PM