"WIT" Coming to the Edge 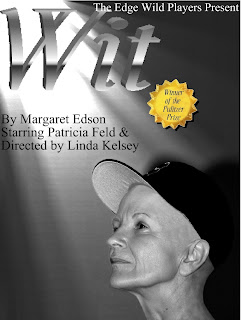 Award winning play, Wit, at the Edge Center in Bigfork

The Boston Globe reviewer described Pulitzer Prize winning play Wit, "Every once in a while a play comes along that bonds people together in extraordinary ways. The play isn't a tearful lecture on how to die; it's a dry-eyed lesson on how to live--with simplicity and kindness." This is an extraordinary play for a community theater to tackle, but with the direction of professional Linda Kelsey, the starring performance of Patricia Feld, professional actor Dan Hopman and the supporting roles by the EdgeWild Players, the Edge Center Theater is again taking on challenging and thoughtful work. Performances at the Edge Center Theater in Bigfork are on Friday, January 28, Saturday, January 29 at 7 pm and on Sunday, January 30 at 2 pm.

Linda Kelsey performed at the Edge as The Belle of Amherst in 2003 and may be best known her Emmy nominated role as for as Billie Newman in the television’s Lou Grant Show. Since returning to St. Paul 14 years ago, Kelsey has been gracing the stages of Twin City theaters including the Guthrie and Park Square. According to director Kelsey, "Wit is the story of a brilliant professor, Vivian Bearing who journeys to a state of grace through a serious illness. The playwright (Margaret Edson) has created an evening of theater that is not only uplifting, but even makes us laugh at the ups and downs of Vivian’s journey as she learns that she is much more than her intellect or her education – that she is a woman with a heart and a soul. Patty has wanted to do this Pulitzer prize-winning play for years, and now I understand why, as I start to delve into all of its depths and surprises."

Wit about coming to terms with life while facing a life threatening illness. Vivian, the main character in Wit, is a college professor and John Donne expert who is dying from cancer. However, as a Boston critic stated, "To say that Wit is about cancer is misleading; it is really about finding a balance between head and heart."

"This is a rich and resonant piece of writing," asserts an Atlanta reviewer, "a play about language and ideas, philosophy and religion. It is at once funny, sad, tragic and life-affirming, complex and simple--yes, a metaphysical paradox" and well worth seeing and talking about. Because Wit offers so much depth and complexity, there will be several opportunities to learn more about the play. Audience members are invited to join the discussions after each performance. Patricia, Linda, and guests will participate, and each performance’s discussion will have a different theme. Friday’s discussion will focus on medical issues, on Saturday on student questions and observations and the Sunday discussion will have a religious emphasis.
The Edge of the Wilderness Book Club, Bigfork Valley Hospital, Bigfork High School and Itasca Community College students, as well as church groups are studying the themes of the play before the performances.
Director Linda Kelsey says about her experience working in Bigfork, “the chance to work with Patty, who is not only a wonderful friend but a great actress, is very exciting. Everyone I’ve been working with on the EdgeWild ‘team’ has brought professionalism and heart to this project. This is a community theater in the best sense of that word, and I want more people to know about it.”

Tickets for the performances on January 28 and 29 at 7:00 and January 30 at 2:00 are available online at www.the-edge-center.org , at Cenex Two Rivers Convenience Store in Bigfork, or at the door. Adult tickets are $10, children 12 and under are $5, and student rush tickets are $3 ten minutes before curtain.